What is atomic fluorescence spectrometry?

Atomic fluorescence spectrometer uses the inert gas argon as the carrier gas. After mixing the gaseous hydride and excess hydrogen with the carrier gas, it is introduced into the heated atomization device, and the hydrogen and argon are heated by combustion in a specially designed flame device.

Qualitative analysis can be performed based on the wavelength of fluorescence spectral lines. Under certain experimental conditions, the fluorescence intensity is proportional to the concentration of the element under test. Accordingly, quantitative analysis can be performed. Atomic fluorescence spectrometers are divided into two categories: dispersive and non-dispersive. The structure of the two types of instruments is similar, the difference is that non-dispersive instruments do not use monochromators. Dispersive instruments consist of a radiation source, a monochromator, an atomizer, a detector, a display and a recording device. The radiation source is used to excite the atoms to produce atomic fluorescence. A continuous light source or a sharp line light source is available. The commonly used continuous light source is a xenon arc lamp, and the available sharp line light sources are high-intensity hollow cathode lamps, induction discharge lamps, and controlled temperature gradient atomic spectroscopy lamps and lasers. The monochromator is used to select the required fluorescence spectral lines and exclude the interference of other spectral lines. Atomizers are used to convert the measured element into atomic vapor, and there are flame, electrothermal, or inductively coupled plasma flame atomizers. Detectors are used to detect light signals and convert them into electrical signals, of which the most commonly used detectors are photomultiplier tubes. Display and recording devices are used to display and record the measurement results, available electric meters, digital meters, recorders, etc.

Atomic fluorescence spectrometry has the advantages of simple equipment, high sensitivity, low spectral interference, a wide linear range of working curves, and can be used for multi-element determination. It has gained wide application in various fields such as geology, metallurgy, petroleum, biomedicine, geochemistry, materials and environmental science.

The atomic fluorescence spectrometer reduces the element to be analyzed in the sample solution to a volatile covalent gaseous hydride (or atomic vapor), which is then introduced into the atomizer with a carrier gas and atomized in an argon-hydrogen flame to form a ground state atom. The atoms in the ground state absorb the energy from the light source and become excited. The excited atoms release the absorbed energy in the form of fluorescence during the de-activation process, and the intensity of this fluorescence signal is linearly related to the content of the element to be measured in the sample. Atomic fluorescence spectrometer using hydride generation - atomic fluorescence spectrometry (HG-AFS) to determine As, Sb, Bi, Hg, Ge, Pb, Sn, Se, Te, Zn, Cd and Cu 12 elements. The detection limit can be up to the ppb level. In terms of practical application, the current national standard method is mostly used to detect arsenic, mercury, selenium and other elements.

Use of atomic fluorescence spectroscopy 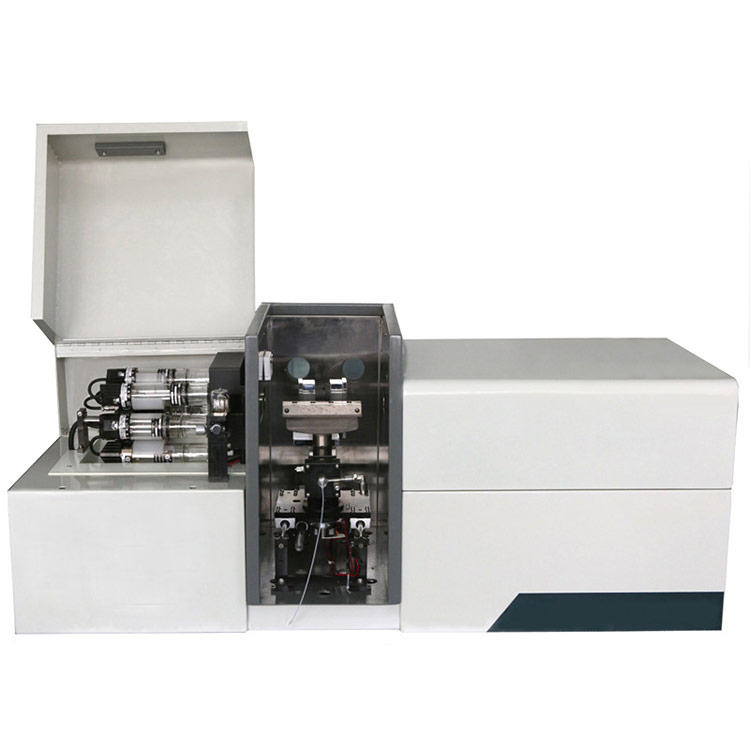 a. Check whether the water seal is well sealed in.

b. Put a drop of methyl silicone oil on the pump tube clamp.

c. Install the elemental lamp to be used for testing.

e. Open the argon cylinder and adjust the partial pressure gauge pressure between 0.2 and 0.3 MPa.

f. Prepare the reducing agent, carrier solution, and standard solution, which are prepared on-site for use.

g. Handle the sample to be tested.

B. Requirements for the sample to be tested

a. Solid samples require 0.5 g to 2 g and need to be processed into a clarified acidic solution state. Microwave digestion is recommended for sample processing because the volatile elements arsenic and mercury can be retained in solution to prevent volatilization from causing bias in results and environmental contamination. Operators also avoid exposure to harmful gases. The use of microwave digestion reduces the time required for sample processing and increases efficiency. By controlling the temperature and pressure parameters, the quality of the ablation can be ensured, and the parallelism and reproducibility of the reactions are completely consistent.

b. Liquid samples require 10 ml to 20 ml and are free of suspended solid particles and colloids or fibers.

C. Precautions for use

b. Check whether the element light spot is right, and adjust it with a dimmer.

c. Clean after the test is completed. Click the cleaning program and put the carrier and reductant capillary into clean water to clean. Cleaning can be done without ignition.

e. Sample tubes, volumetric flasks, and all used vessels, where it is necessary to use again, should be cleaned with 10% nitric acid soak before use.

f. The instrument has a high sensitivity of determination and requires special attention to all aspects of contamination.

g. If the sample matrix is complex, eliminate the interference first if possible.

h. When installing the element lamp, the lamp plug convex must coincide with the concave of the socket, and do not plug and unplug with electricity, otherwise it will damage the instrument.

i. Open the gas cylinder first during the test to prevent liquid from backing up and corroding the gas circuit system.

j. The pump tube should be properly maintained. Pay attention to the proper level of tube pressure and head tightness and do not let the pump tube run empty.

k. If you encounter a sudden power failure, turn off the power switch, close the valve of the argon gas cylinder, and wait for the restoration of power before restarting the test.

How to buy atomic fluorescence spectrometry?

ANTITECK provide lab equipment, lab consumable, manufacturing equipment in life sciences sector.
If you are interested in our atomic fluorescence spectrometry or have any questions, please write an e-mail to info@antiteck.com, we will reply to you as soon as possible.
You may also like:
Ultrasonic Extractor
Electric Blender
Lab Emulsifier