What is circular dichroism spectrometer?

a. Dual light source design provides an unmatched signal-to-noise ratio. The technology has been upgraded to eliminate errors in the solid sample itself when measuring solid samples and to acquire IR spectra and vibrational circular dichroism spectra simultaneously. Digital signal processing of circular dichroic spectra without locking or electronic filtering. The independent infrared light source interface and the constant temperature of PEM can obtain the baseline without warp time change.

b. The optical axis is controlled with high precision, and the device is optimized by controlling artifacts and warp time changes. The circular dichroic spectrum is detected by the DSP locking function that is suitable for the VCD algorithm, and the signal-to-noise ratio is greatly improved.

c. The optical system, sample chamber and detector can be purged, and the measurement can be stable without the influence of the atmosphere. Circular dichroism spectroscopy is mainly used for the study of chiral optically active substances. It can be used for organic stereochemistry, purity testing of optically active substances, quantitative analysis of drugs, natural organic chemistry, biochemistry and macroscopic macromolecules, metal complex chemistry, polymer chemistry, protein folding studies, protein conformation studies, physical chemistry, etc.

d. Instead of correcting linear anisotropy artifacts, the auto-alignment system directly eliminates them.

h. A thermally stabilized modulator system is used to take the baseline drift out of the equation.

i. Operation of the oversized Dewar bottle for up to 15 hours is allowed without refills.

Circular dichroism spectrometer is an effective analytical instrument for the study of molecular structural asymmetries, allowing the following measurement functions.

Circular dichroism spectrometers are widely used in the following industries.

b. Conformational studies of proteins, peptides, and nucleic acids.

e. The study of the absolute conformation of compounds.

Use of circular dichroism spectrometer 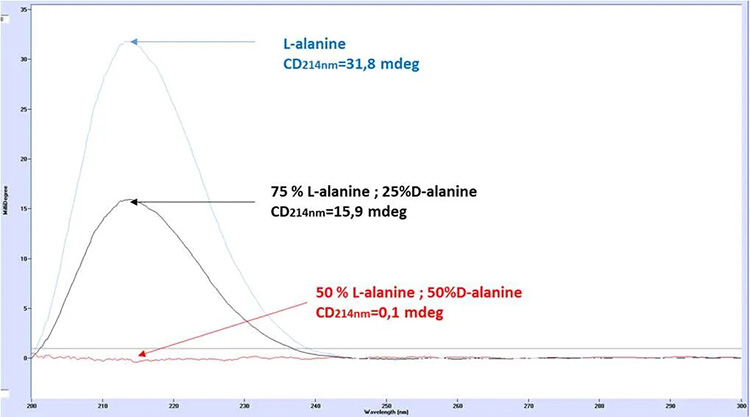 a. A blank solvent is required for the test as a control background, with at least 5 ml of sample and solvent each. The sample must maintain a certain level of purity without light-absorbing impurities, and the solvent must have no absorption interference at the measurement wavelength. The sample can be completely dissolved in the solvent, forming a homogeneous and transparent solution.

d. Buffers and solvents are individually checked for absorption interference or formation of precipitates and gels in the measurement wavelength range before preparing the solution. In protein measurements, the phosphate with excellent transparency is often chosen as the buffer system.

e. If the samples are different, the measured circular dichroism spectral range is different, and the selection of the cell size (optical diameter) and the concentration requirements are different. Protein CD spectroscopy measurements are generally performed in relatively dilute solutions.

a. 10-20 mg of solid CD is required, preferably powdered samples, special samples can be communicated specifically.

b. If the sample penetration is not good, it is recommended to use integrating sphere mode.

a. Instrument failure should be reported to the technician in time to deal with. When an abnormality occurs in the instrument, the operator should immediately turn off the power, protect the site and report it in time.

c. The clamp should be vertical when pressing the sample. Do not press the excitation button while the sample is not clamped. Do not touch or lift the sample clip when excited.

f. If the operator encounters a sudden power failure, he should first turn off the total, and then turn off the other power supplies, wait until the call comes, and then operate the machine according to the terms of the regulations.

How to buy circular dichroism spectrometer?

ANTITECK provide lab equipment, lab consumable, manufacturing equipment in life sciences sector.
If you are interested in our circular dichroism spectrometer or have any questions, please write an e-mail to info@antiteck.com, we will reply to you as soon as possible.
You may also like:
Lab Disperser
Laboratory Mixer
Hot Plate Stirrer