What is gas chromatography detector?

Gas chromatography detector is a device that converts the signal of the effluent material after the column into an electrical signal.

The detector takes advantage of the principle that a certain physical or chemical property of the sample differs from the mobile phase. When the sample flows out of the column with the mobile phase through the detector, it causes a change in the background value of the mobile phase, and by converting the changed optical or other signals into an electrical signal, it is recorded as a chromatographic peak on the chromatogram.

A. Classification by response time

Integral detectors display the accumulation of a physical quantity over time, which means that the signal it displays refers to the total amount of material passing through the detector at a given time, such as mass detectors, volume detectors, conductivity detectors, and titration detectors, etc. These detectors are less commonly used in general chromatography analysis.

B. Classification by response characteristics

Mass-based detectors measure the change in the rate at which the sample component carried in the carrier gas enters the detector, which means that the response value of the detector depends on the mass of the component entering the detector per unit time, such as hydrogen flame detectors, flame photometric detectors, thermal ion detectors, etc.

In the detection process, the measured material does not undergo irreversible changes, such as thermal conductivity detectors and electron capture detectors.

Types of detectors in gas chromatography

GC flame ionization detector (FID) is a destructive mass type detector. It uses the chemical ionization of organic matter in the presence of a hydrogen flame to form a stream of ions, which is detected by measuring the intensity of the ion stream. It is characterized by a significant response only for carbon-containing organics, and a low or no signal for non-hydrocarbons, inert gases, or substances that are difficult to ionize or not ionized in the flame, such as some oxides of nitrogen (NO, N2O, etc.), some inorganic gases (SO2, NH3, etc.), CO2, CS2, and H2O. Formic acid is not easy to form ions in the flame due to the high oxidation state and does not produce a significant signal too. Flame ionization detector has the advantages of high sensitivity, wide linear range, less harsh operating conditions, low noise, and small size. It is a commonly used detector for the detection of organic compounds.

Carbon atoms account for almost all organic compounds. Flame ionization detector in gas chromatography is sensitive to compounds containing carbon atoms, so it can detect them. However, FID is not sensitive to carbon atoms that have double bonds with oxygen, such as carbonyl and carboxyl groups (CO, CO2, HCHO, HCOOH, CS2, CCl4, etc.).

The mechanism of generating specific ions in FID is complex, and two steps are generally considered to be important.

a. The formation of radicals under anoxic conditions.

b. The ionization of organic radicals due to oxygen in the excited atomic or molecular state.

Flame ionization detector produces a hydrogen flame by burning air and hydrogen supplied from below. The carbon in the sample carried into the detector by the carrier gas is oxidized by the hydrogen flame, which causes an ionization reaction. The ions formed are attracted by the collector to the electrostatic field where the composition is detected. 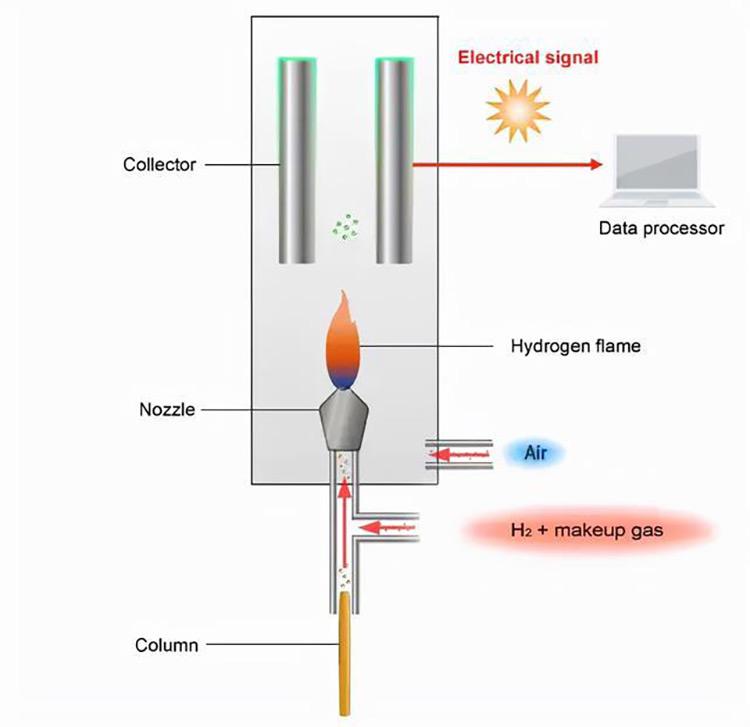 Thermal conductivity detector is also known as universal detector, because it can respond to most compounds, including inorganic gases such as O 2, N 2, and CO2. The principle is to use the difference in thermal conductivity between the component being detected and the carrier gas to detect changes in the concentration of the component. It allows detection at a high percentage and low ppm levels. The TCD is mainly used for the detection of inorganic gases and components to which the FID is not sensitive. It is most widely used because of its simple structure, stable performance, response to both inorganic and organic compounds, versatility, and wide linear range. Since the sample is not destroyed during the assay, it can be used for preparation and other co-operative identification techniques. 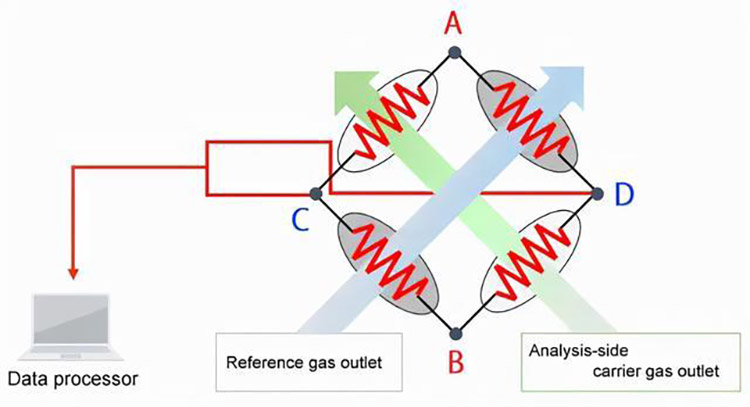 Electron capture detector is a concentration-based detector that uses a radioisotope as a radioactive source to bombard the carrier gas to generate positive ions and free electrons. Under the influence of the applied electric field, the electrons move toward the positive pole, forming a certain ion flow called the base stream. When the carrier gas enters with trace amounts of electronegative components (compounds containing halogens, sulfur, phosphorus, cyanide, etc.), these electrophile components will capture electrons to form negative ions and cause the base current to drop, resulting in a detection signal.

Gas chromatography with electron capture detector is characterized by high sensitivity and good selectivity. It is an exclusive type of detector and is currently the most effective detector for the analysis of trace electronegative organic compounds. The stronger the electronegativity of the element, the higher the sensitivity of the detector. It has a high response for compounds containing halogens, sulfur, oxygen, carbonyls, amines, etc. Electron capture detectors have been widely used for the analysis and determination of organochlorine and organophosphorus pesticide residues, metal complexes, metal-organic polyhalogen or polysulfide compounds, etc.

The ECD detects ions by reading the change in voltage value that maintains a constant ion current collected at the collector. 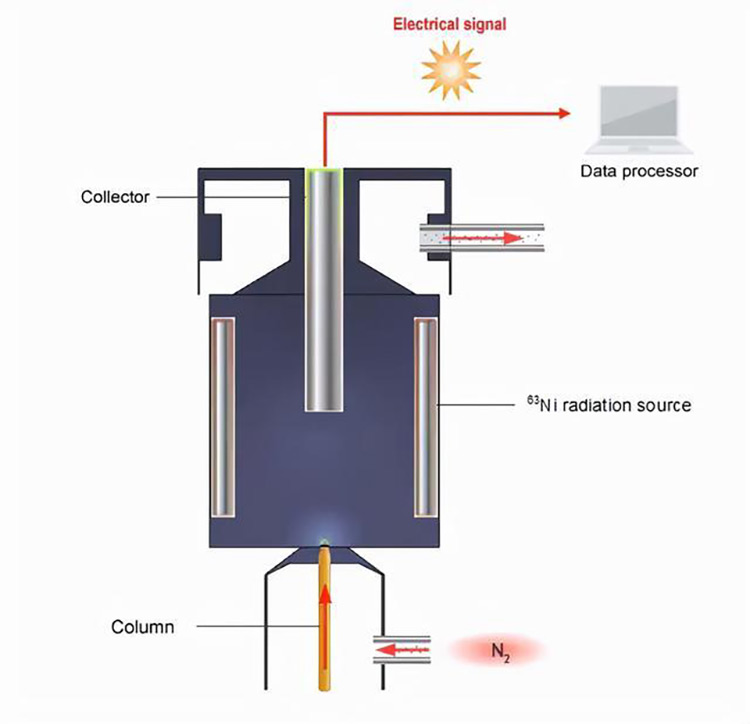 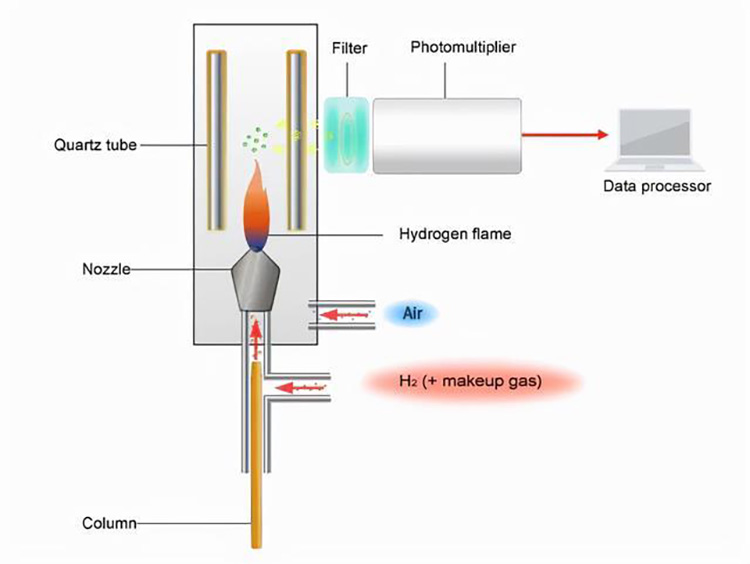 Sulfur chemiluminescence detector is a selective and highly sensitive detector for sulfur (S) compounds, which can detect very small amounts of sulfur compounds. The SCD is about an order of magnitude more sensitive than the FPD, which also selectively detects sulfur-containing compounds, and the sensitivity of the SCD is linearly proportional to the sample concentration, as the relationship is quadratic for the FPD. The SCD also exhibits equimolar sensitivity and measures sulfur-containing compounds with the same relative sensitivity, regardless of compound structure. This property of the SCD allows the use of calibration curves of other compounds to determine the approximate concentration of the target compound, even in the absence of a standard sample. The significant difference between the SCD and other detectors is that the SCD maintains a low voltage environment.

The sulfur chemiluminescence detector utilizes a chemiluminescence reaction caused by ozone oxidation. Sulfur compounds are converted to XS chemicals that are mostly SO. At very high temperatures, about 1000°C, the redox furnace can show chemiluminescence. The XS chemical is brought to the detector area where ozone converts it to the excited state SO2* (free radicals.) SO2* emits light when it returns to its basic state, and the SCD detects the sulfur content by measuring this light with a photomultiplier tube. 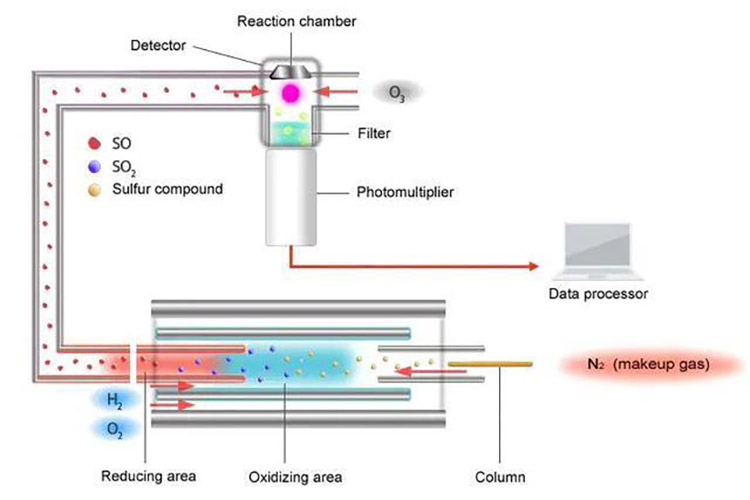 Mass spectrometry detector is a mass-based, general-purpose detector with the same principle as mass spectrometry. It can give not only the chromatogram (total ion flow chromatogram or reconstructed ion flow chromatogram) that can be obtained by a general GC detector, but also the mass spectra corresponding to each peak. It is an effective tool for GC qualitative analysis because it can provide information on the analytical structure of a compound through automatic computer search of a library of standard spectra. It is often referred to as chromatography-mass spectrometry (GC-MS) analysis, which combines the high separation power of chromatography with the structural identification power of MS.

G. Other detectors in gas chromatography

How to buy gas chromatography detector?

ANTITECK provide lab equipment, lab consumable, manufacturing equipment in life sciences sector.
If you are interested in our gas chromatography detector or have any questions, please write an e-mail to info@antiteck.com, we will reply to you as soon as possible.
You may also like:
Piston Pump
Chemical Sterilizer
Buffing Machine