What is gas chromatography machine? 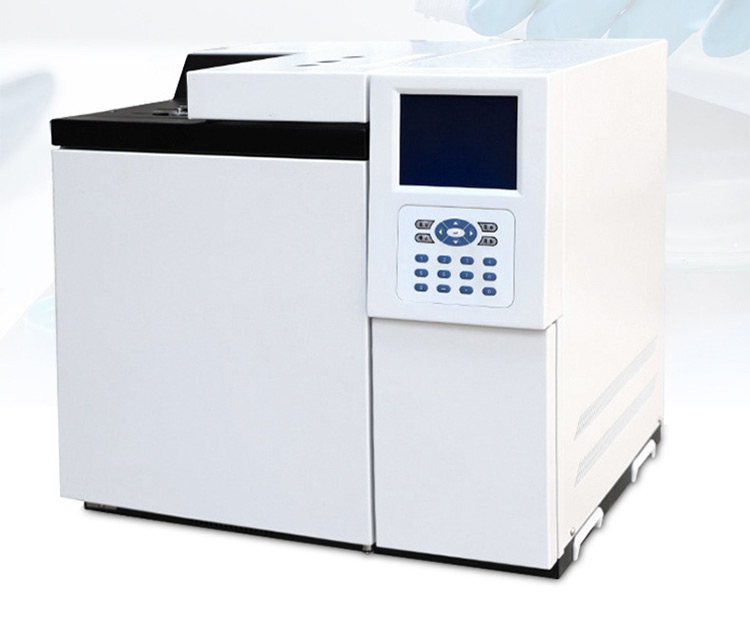 Gas chromatography is a chromatographic separation analysis method using gas as a mobile phase. When the two phases are in relative motion, these substances are repeatedly distributed between the two phases, so that the original only a small difference in nature produces a large effect, and the different components are separated. This method is characterized by high efficiency, high sensitivity, high selectivity, fast analysis, wide application, and easy operation, and is suitable for qualitative and quantitative analysis of volatile organic compounds. Gas chromatography is widely used in the fields of food, environment, pharmaceuticals, biological materials, etc. Gas chromatograph machine is an instrument for qualitative and quantitative analysis of complex multi-component mixtures using chromatographic separation and detection techniques. It can usually be used to analyze organic compounds in soil that is thermally stable and has a boiling point not exceeding 500°C, such as volatile organic compounds, organochlorines, organophosphorus, polycyclic aromatic hydrocarbons, phthalates, etc.

Gas chromatography machine uses a gas as the mobile phase (carrier gas). When the sample is "injected" into the injector by a microinjector, it is carried by the carrier gas into the packed column or capillary column. Due to the difference in distribution or adsorption coefficient between the mobile phase (gas phase) and stationary phase (liquid or solid phase) in the column, the components are separated in the column by repeated distribution between the two phases under the flushing of the carrier gas, and then the components are detected sequentially by the detector connected to the back of the column according to the physicochemical properties of the components. 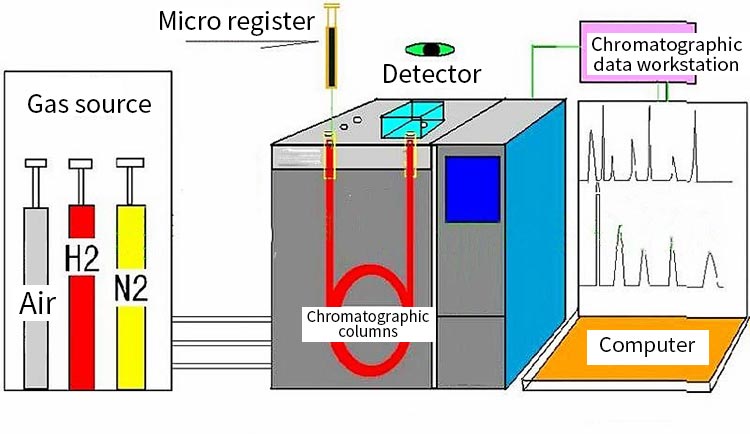 A. Routine maintenance and precautions for gas circuit system in gas chromatography machine

a. The gas line pressure is recommended to be around 0.4M
pa for carrier gas and auxiliary gas.

c. The rubber seal of the air circuit should be replaced regularly to prevent aging and air leakage. 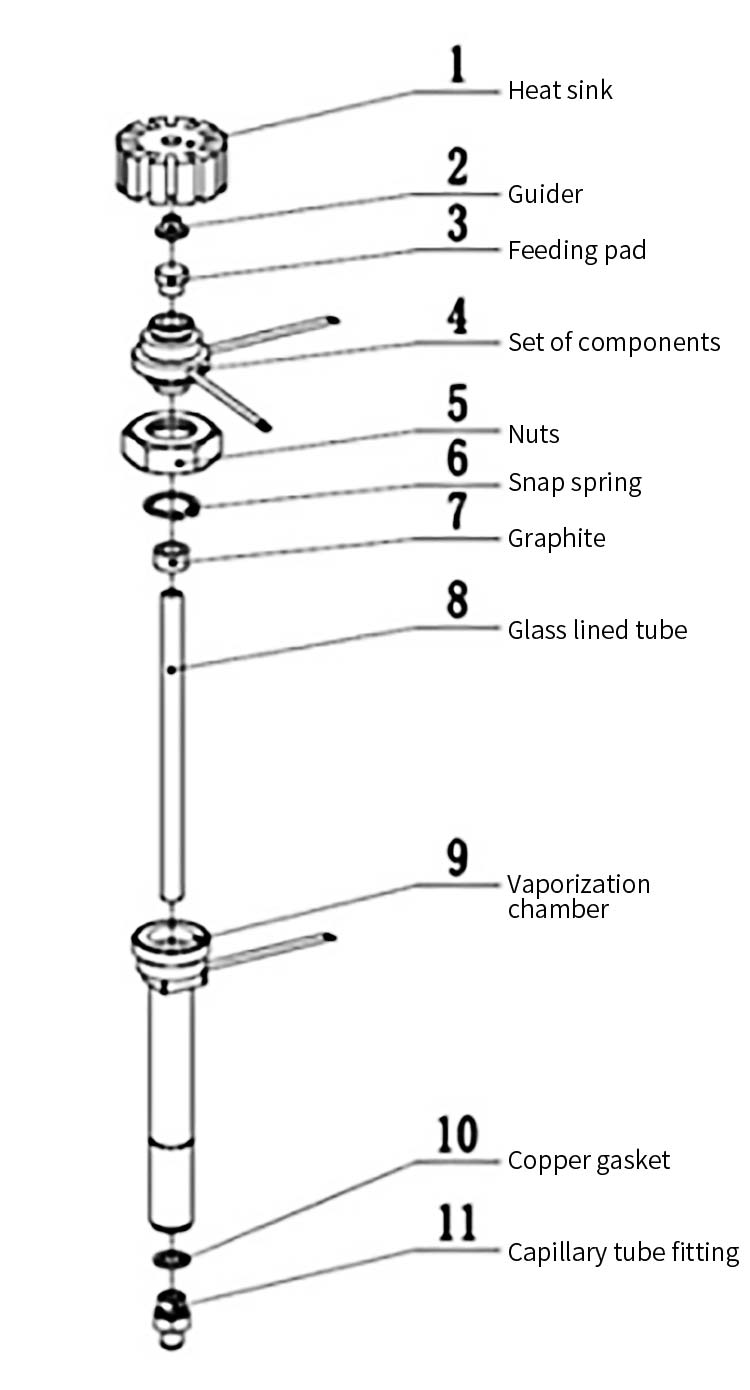 a. Function of spacer blowing

The spacer discharge is expelled at a lower temperature than the vaporization temperature, and spacer purging prevents spacer aging.

b. Reason for shunting

B. Daily maintenance and precautions for the injection system

b) If the temperature setting for the inlet port is too high, a high temperature-resistant inlet pad should be used.

c) When replacing the sample pad, the instrument should be operated after cooling down and shutting down or before powering on.

d) The heat sink cap should not be tightened too much to prevent clogging of the sample inlet needle.

a) The glass liner of the sample inlet should be replaced or cleaned regularly.

b) In case of frequent use, mandatory replacement should be done once a quarter.

c) When replacing the liner tube, it needs to be ultrasonically cleaned together with the heat sink cap.

d) Before disassembling the instrument, all parts must be brought down to room temperature, disconnect the power supply and turn off the gas supply of each pipeline. Remove the black heat insulation cover, remove the heat sink cap, use a special bayonet wrench to remove the cap connected to the gas line, and carefully remove the liner tube.

e) Debris and unvaporized material from the feed pad can accumulate in the liner tube, leading to the deposition of dirt in the liner tube. Dirty liner tubes can cause such things as changes in peak shape, poor reproducibility, no peaks, or low response values. Before cleaning, you need to remove the O-ring. The glass liner can be ultrasonically cleaned with acetone or ethanol. If there are stubborn stains, you can use 20% nitric acid to soak and clean. You can use chromic acid washing solution to soak and clean according to the degree of cleanliness. Then rinse with a lot of water and then ethanol cleaning and blowing dry for use.

c. Cleaning of the manifold

The manifold is connected with a control flow device after the manifold. When used for a long time, there will be high boiling material and other accumulation or blockage of the manifold, so it needs to be cleaned or replaced. After removing the manifold, you need to clean it with a syringe filled with acetone, then blow dry it with nitrogen and reinstall it. Routinely clean every six months. It is recommended to directly replace the cold trap with a new one, and check the status every six months.

The separation system and column temperature chamber in the gas chromatography machine typically include the column chamber (back door, fan, heating), the column, and the associated connectors. 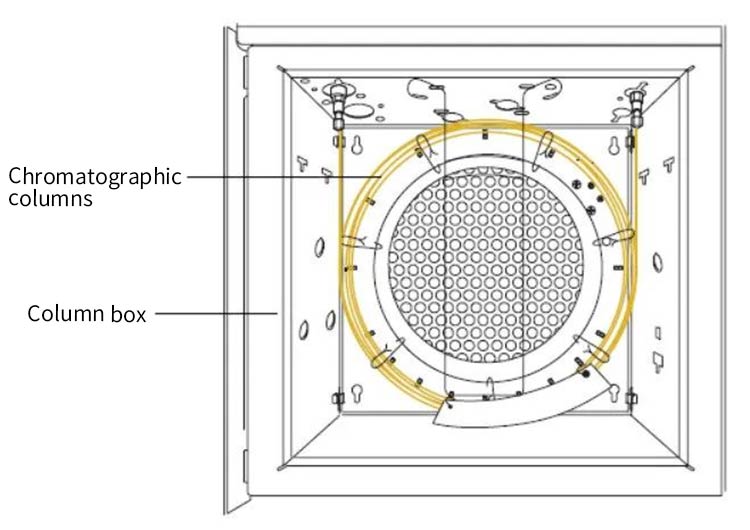 When replacing a chromatographic column, the head and tail of the column need to be cut by 1-2 cm. A portion of the column often has to be removed when aging the column as well. The fastening screw and graphite pad must be passed before cutting the column. The requirements for excising the columns are strict and they should not be broken or cut with scissors at will. Professional cutting tools should be used to make the cutting surface of the column flush.

Aging should be performed on new columns, columns with reduced column efficiency, and columns that have not been used for a long time. The temperature generally follows the formula: T(max) ≤ (use temperature MAX + withstand temperature MAX) /2.

Check the column information before aging to prevent irreversible damage caused by setting too high a temperature. In the process of using the programmed temperature rise, the temperature should be slowly increased from the low temperature at a rate of 1-2°C/min to the highest temperature, and then maintained for 6-8 hours. The process takes a low flow rate carrier gas. If the liner has not been replaced for a long time, clean the glass liner and cut off the front end of the column by a few centimeters before aging. When aging the column, do not connect the detector to avoid contamination the detector.

The removed column needs to be protected to avoid contamination or damage to the column. The head and tail of the column should be sealed with a rubber plug and placed in the box where the column belongs. When the instrument is not used for a long period, the column that comes with the machine should also be removed and sealed.

The components, separated by the column, enter the detector in turn and are converted into the corresponding electrical signals according to their concentration or mass change with time, which are recorded and displayed after amplification to give the chromatogram. The detector commonly used in laboratories is the flame ionization detector (FID), which has a wide range of applications and is suitable for organic detection.

FID principle: The combustion of carbon-containing organics in an H2-Air flame generates fragment ions, which form a stream of ions under the action of an electric field. The components separated by the column are detected according to the intensity of the electrical signal generated by the ion stream.

The temperature control mode is divided into the thermostat and programmed temperature rise.

For simple samples with a less wide boiling range, the thermostatic mode can be used. The thermostat mode is used for general gas analysis and simple liquid sample analysis.

How to buy gas chromatography machine?

ANTITECK provide lab equipment, lab consumable, manufacturing equipment in life sciences sector.
If you are interested in our gas chromatography machine or have any questions, please write an e-mail to info@antiteck.com, we will reply to you as soon as possible.
You may also like:
Peristaltic Pump
Cold Sterilizer
Sputter Coater