What is Karl Fischer moisture meter? 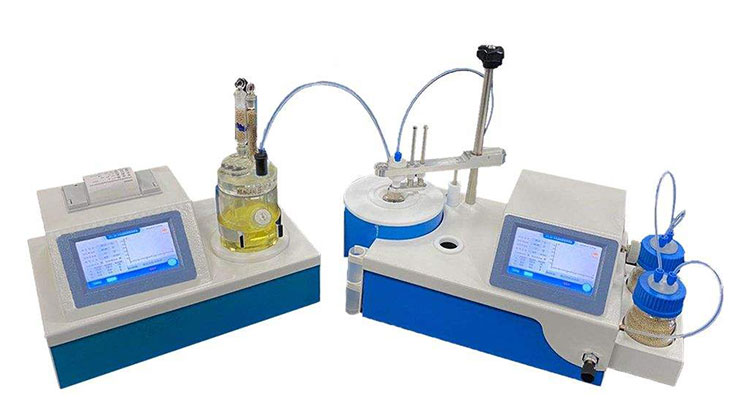 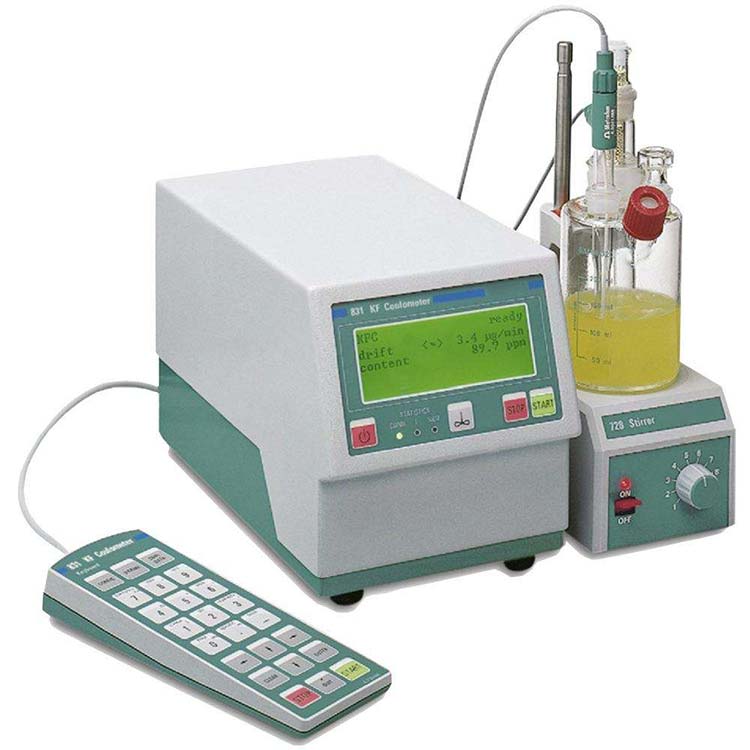 The working principle of Karl Fischer moisture meter is that when the Karl Fischer reagent in the electrolytic cell of the instrument reaches equilibrium, the sample containing water is injected, and the water is involved in the redox reaction of iodine and sulfur dioxide, and in the presence of pyridine and methanol, hydrogen, iodine, acid pyridine, and methyl pyridine sulfate are generated, and the consumed iodine is produced by electrolysis at the anode so that the redox reaction is carried out continuously until all the water is consumed. According to Faraday's law of electrolysis, iodine is produced by electrolysis in proportion to the amount of electricity consumed during electrolysis, and the reaction is as follows.
H2O+I2+SO2+3C5H5N→2C5H5N·HI+C5H5N·SO3
C5H5N·SO3+CH3OH→C5H5N·HSO4CH3

It can be seen from the above reaction, that is, 1 mole of iodine oxidizes 1 mole of sulfur dioxide, which requires 1 mole of water. So it is the equivalent reaction of 1 mole of iodine and 1 mole of water, i.e. the electricity of electrolysis of iodine is equivalent to the electricity of electrolysis of water. 2×96493 coulombs of electricity are needed for electrolysis of 1 mole of iodine and 96493 milli-coulombs of electricity are needed for electrolysis of 1 millimole of water.
When both I2 and I- are present in the solution of the reaction cell, the reaction takes place simultaneously at the positive and negative ends of the electrodes, i.e., I2 is reduced at one electrode and I- is oxidized at the other electrode, so that a current passes between the two electrodes. If only I- and no I2 is present in the solution at the same time, no current passes between the two electrodes.
Karl Fischer reagents contain substances such as pyridine and iodine as active ingredients, which are dosed into the reaction cell and can react chemically with the water in the solution to be measured as follows.
I2+SO2+3Base+ROH+H2O→2Base·HI+HSO4R
H2O+SO2+I2+CH3OH+3RN→2RN·HI+RN·HSO4CH3

The reaction continues with constant consumption of water to produce I- until the end of the titration of the reaction, when the water is consumed. At this point, the solution has a trace amount of unreacted Karl Fischer reagent present in order for the simultaneous presence of I2 and I- to occur, the solution between the two platinum electrodes begins to conduct electricity, the end point is reached as indicated by the current, and the titration is stopped. The water content of the solution is thus calibrated by measuring the volume (capacity) of the consumed Karl Fischer reagent. 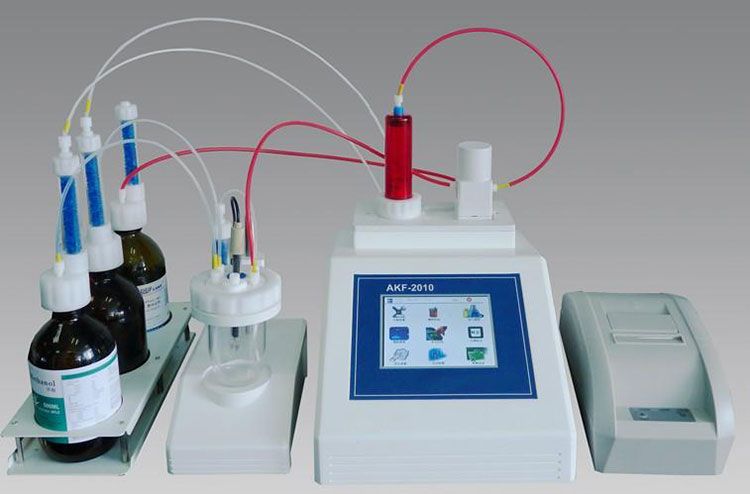 1. Since the Karl Fischer moisture meter determination is based on a chemical reaction that depends on the presence of water, it is extremely accurate.

2. The coulometric method avoids the need for titrimetric determination and is therefore an absolute method, consuming an electric current that correlates exactly with the amount of iodine produced.

3. Karl Fischer moisture meter is a rapid method that requires minimal sample preparation before starting the titration, except for dissolving them in a suitable solvent and pre-titrating the solution and cuvette to remove all traces of water.

4. The water equivalents of the Karl Fischer Moisture Titrator reagents will change over time, so they should be calibrated periodically when using the volumetric method to ensure the accuracy of the determination. 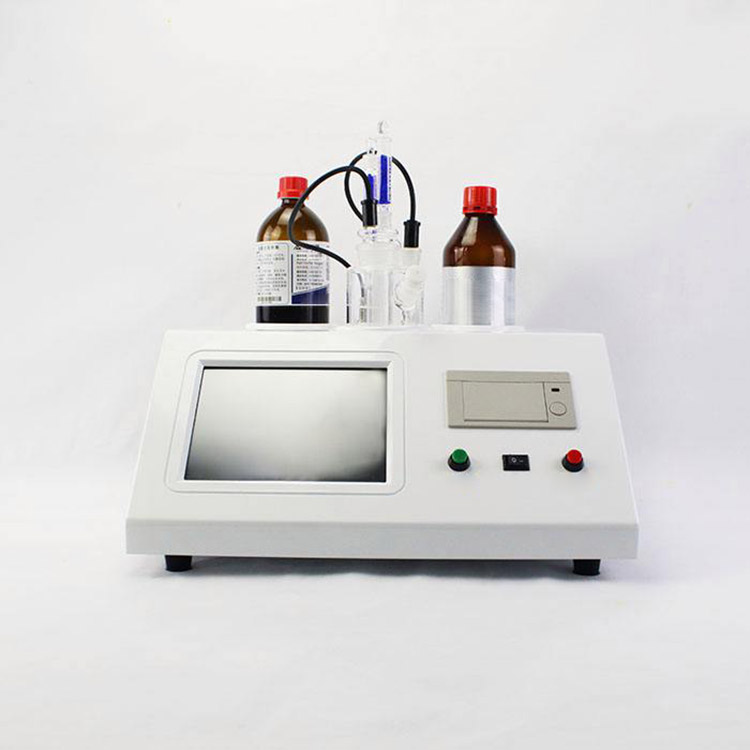 When iodine ions are contained in the Karl Fischer reagent, iodine will be generated and the charge will be consumed, and the moisture content can be obtained from the total power consumption, which is called the coulometric method.
Specific application areas:
Hydrocarbons, oils, alcohols, halogenated hydrocarbons, phenols, lipids, ethers, etc. 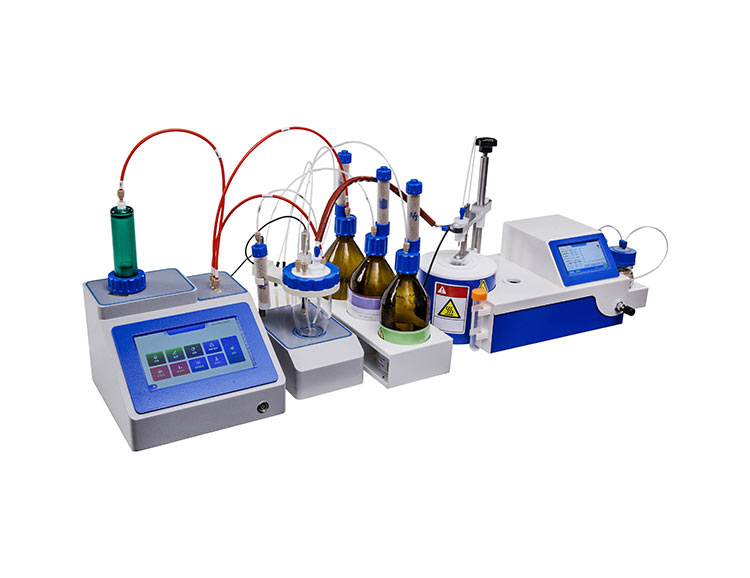 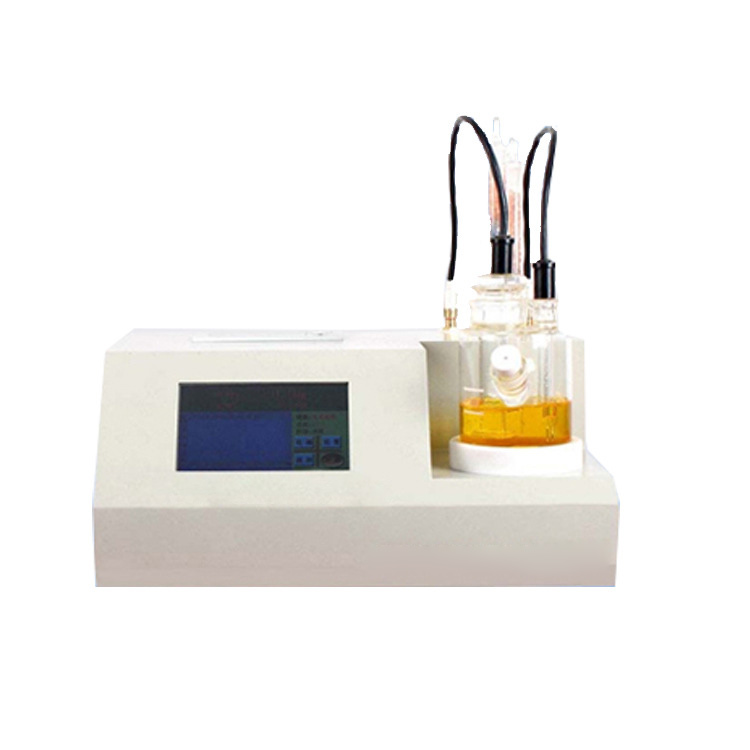 Features:
Automatic Karl Fischer Moisture meter is high test sensitivity, an automatic judgment of the end of the test, beep alarm prompt, can automatically display, and print the test results.

2. Generally, take the average of three to four measurements with good repeatability as the measurement value of the instrument, and compare it with the nominal value of the standard substance (standard sample) to obtain the calibration result of the Karl Fischer moisture meter. 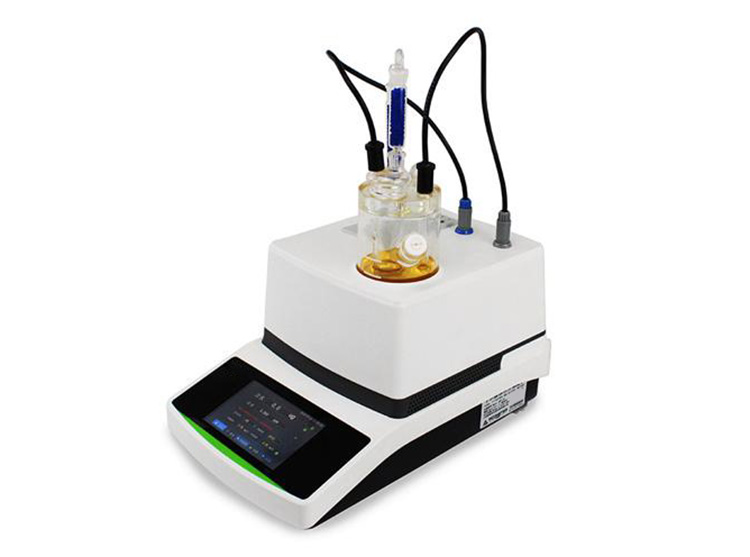 Security
Karl Fischer reagent mainly consists of a solution of iodine, sulfur dioxide, pyridine, and methanol. Among them, sulfur dioxide and pyridine are highly volatile and harmful to the human body, so the operation should be carried out under good ventilation conditions. Especially when changing reagents, pay attention to the exhaust air to prevent harmful gases from being absorbed into the body. And wear protective glasses and latex gloves to avoid splashing harmful reagents on the eyes and hands, once the reagents are splashed on the eyes and hands, they should be flushed with flowing water immediately, and serious cases should be sent to the hospital.
However, the actual situation is that some operators do not know enough about the harmfulness of the reagent, and without any protective measures, they pour the reagent in and out at will, and the room is full of odor without any regard, so the problem of self-protection awareness needs to be strengthened.

Electrode contamination and maintenance
An electrode is the key component of the Karl Fischer moisture meter.
Some electrodes are used in the analysis of oil samples for a long time. After the surface of the electrode is contaminated with oil, the sensitivity is reduced, which makes the electrode sluggish in judging the end point and causes the Karl-Fischer reagent to be excessive and the solution color is dark when the endpoint is reacted, and the electrode must be cleaned at this time. Although the contaminants on the electrode are not visible to the naked eye, the sluggish response can be observed, which directly affects the measurement accuracy. Therefore, the electrode must be cleaned after a period of use, but a considerable number of operators do not consider this problem.
When the sensitivity is decreased and the electrode is heavily polluted. You can use paper with a little acetone to wipe the electrode, but you must be careful and wait for the acetone to evaporate completely before you can use it. Or immerse the electrode in the dilute nitric acid solution for 24 hours, then take it out, rinse it with water and wipe it with filter paper. The electrode can also be washed with potassium dichromate solution for l minutes to activate the electrode. In special cases, such as samples waiting to be analyzed, cleaning the electrode time is not allowed, then an emergency solution can be used to solve the incident of electrode contamination. Use very fine sandpaper to gently rub the electrode ends, filter paper wipe clean, you can see the effect.
If the instrument is not used for a while, all Karl Fischer reagents in the pump tube and liquid path should be drained to avoid blocking the pipeline due to crystallization caused by volatilization of reagents; similarly, Karl Fischer reagents in the reaction bottle should also be drained and the electrode wiped clean. In the detection of the instrument can often be found, the operators of the end of the sample determination, power off a matter of fact, the maintenance and maintenance of the instrument and the accuracy of the measurement should be closely related to the problem of insufficient awareness.

ANTITECK provide lab equipment, lab consumable, manufacturing equipment in life sciences sector.
If you are interested in our Karl Fischer moisture meter or have any questions, please write an e-mail to info@antiteck.com, we will reply to you as soon as possible.
You may also like:
GMP Cleaner
Supercritical Extraction Machine
Ultrasonic Extractor