What is Mössbauer spectroscopy?

Mössbauer spectrometer is an instrument used to determine the recoil-free resonance absorption effect of γ-rays from substances.

Mossbauer spectrometer has its roots in nuclear physics but is deeply embedded in many technical fields such as chemistry, solid state physics, metallurgy, geology, material science, archaeology, and environmental science. It can be used to study amorphous materials, solid surfaces and chemical catalysis, mineralogy, chemical structure, and chemical bonding, lattice dynamics and phase transitions, magnetic materials and ultra-fine field studies, radiation damage and ion injection, metals and alloys, electron polarization, lattice defects, etc. Overall, it can be found in almost every scientific field where the microstructure of matter is currently studied.

In 1958, R.L. Mossbaure, a young German physicist, discovered the Mössbauer effect while working on the resonant absorption of Y-rays from the Ir atomic nucleus.

Mossbauer effect is actually a recoil-free Y-ray resonance absorption phenomenon. In 1961, Mössbauer was awarded the Nobel Prize in Physics for this phenomenon.

Mössbauer effect is the phenomenon of y-ray emission and resonance absorption of a recoilless atomic nucleus, which means that the y-ray photons emitted by an excited nucleus are absorbed by another atomic nucleus of the same element in the ground state and jump to the excited state. 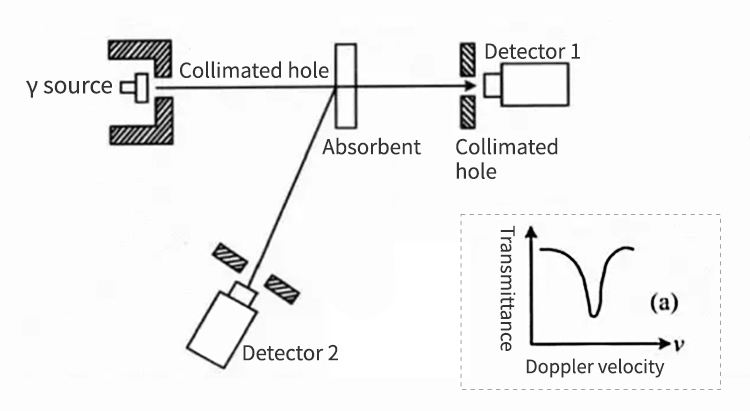 The structure of the Mössbauer spectrometer mainly consists of a radioactive source, a drive unit, an amplifier, a γ-ray detector, and a data recording device. In the transmission Mössbauer spectrum, the absorption peaks are inverted because the transmission count rate is minimized when the absorption resonates. For some simple spectra, only qualitative analysis is needed to obtain valuable information, while for complex spectra, it is necessary to fit them to the split peaks and then compare them with theoretical spectral lines to obtain useful information.

A radioactive source is a source that provides gamma rays with specific energy and is selected depending on the sample (absorber). The common Musburger sources are 57Co, 119Sn, and 121Sb. The Musburger nuclei are not uniformly distributed and are mostly concentrated within the atomic numbers 50-80. The lightest Musburger nucleus is 40K.

The driving device is used to achieve the movement of the radiation source, so as to modulate the frequency or energy according to the Doppler effect.

Detectors are used to detect the transmitted γ-rays. Most of the γ-rays radiated from the Musburger sources are not monochromatic, so a suitable detector needs to be selected. The energy of γ-rays from Mössbauer nuclei is generally in the range of 10-100 keV, so positive ratio counters, NaI(TI) scintillation detectors, and semiconductor detectors can be used.

a. Simplicity of equipment and measurements.

b. The availability of a wide range of physical and chemical information simultaneously.

d. Non-destructive to the specimen.

e. Only specific nuclei have resonance absorption, and the Mössbauer effect is not interfered with by other elements.

f. Mössbauer effect is generally influenced by the extranuclear environment within 2 nm, making it very suitable for the detection of fine crystalline and amorphous materials.

g. The object under study can be a conductor, semiconductor or insulator, and the specimen can be a crystalline or amorphous material, a thin film or a surface layer of a solid, or a powder, an ultra-fine particle, or even a frozen solution.

a. It is not possible to measure gases and less viscous liquids.

b. Only a limited number of nuclei have the Mössbauer effect, the common elements being Fe, Sn, and Sb.

c. Many experiments must be performed at low temperatures or under conditions with preparative sources.

Isomer shifts can provide information about chemical bonds, valence states, and coordination groups. When the environment of the nuclei in the incident source and absorber are different, an energy difference between the absorber and the source occurs, which is called the homogeneous anomalous shift, denoted as δ or I.S.

The homogeneous anomalous displacement depends mainly on the electron charge density at the nuclear position, which is related to the electron pairing state around the nucleus of the Mössbauer atom. δ can be positive or negative, and a positive δ indicates that the electron charge density at the nucleus from the radioactive source to the absorber is increasing and the volume of the nucleus is decreasing, and vice versa. If the chemical state in which the Mössbauer atoms are in the incident source is exactly the same as the absorber, the chemical shift is zero. When the Mössbauer spectrum atoms are in different valence states and different spin states, there are in principle different chemical shifts. 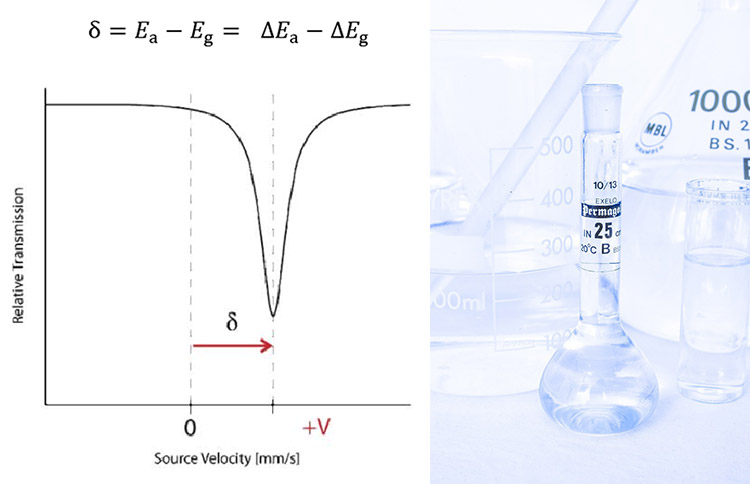 (Isomer shifts in the Mössbauer spectrometer)

The Musburger spectroscopy effect has resonance absorption only for specific nuclei, so the test is targeted and not interfered with other elements. The simplicity and high resolution and sensitivity of Musburger spectroscopy make it a nondestructive test tool capable of providing a wide range of physicochemical information simultaneously. As a result, it can be widely used in element-specific applications. The Musburger effect is generally affected by the extranuclear environment in the range of 2 nm and is therefore also very suitable for the detection of fine crystalline and amorphous materials. The object of study can be a conductor, semiconductor or insulator, a crystalline or amorphous material, or a powder or ultrafine particle. Currently, Musburger spectroscopy has been well established for the characterization of iron species.

In recent years, several researchers studying Fe-containing catalysts have started to use Musburger spectroscopy to characterize the coordination environment of Fe in Fe nanomaterials, which provides an experimental basis for the role of Fe in catalysts. They have tried to characterize the changes of iron species in catalytic materials during electrochemical processes using in situ Musburger spectroscopy tests to indicate the source of their activity. Since the signal collection of the Musburger spectrum requires a certain amount of absorption by the material under test to obtain a significant signal. For natural iron, the natural abundance of 57Fe that can produce a Musburger spectrum signal is only about 0.04%, and for iron-carbon electrocatalytic materials, which are already small in iron content, the amount of57Fe naturally contained is even smaller and is not sufficient for experimental testing. Therefore, the 57Fe isotope must be used to prepare catalytic materials for testing. In addition to the preparation of test materials rich in 57Fe isotopes, the weakening effect of the aqueous layer on γ-rays during the test has to be taken into account. Therefore, special electrolytic cells must be designed to have the thinnest possible water layer in the test window to meet the test requirements for in situ electrochemical testing conditions for Musburger spectroscopy.

B. Quadrupole splitting in Mössbauer spectroscopy

Quadrupole moment splitting gives the structure with key properties, molecules and electrons. When the electric field gradient is not zero and the charge distribution of the nucleus is not spherically symmetric, there is an electric quadrupole moment. The electric quadrupole interactions allow the partial elimination of the simple energy levels, hence the hyperfine splitting. The Fe quadrupole splitting produces an image of a double peak in the Mu spectrum, and the distance parameter between the double peaks in the Mu spectrum is denoted by ∆Q or Q.S. 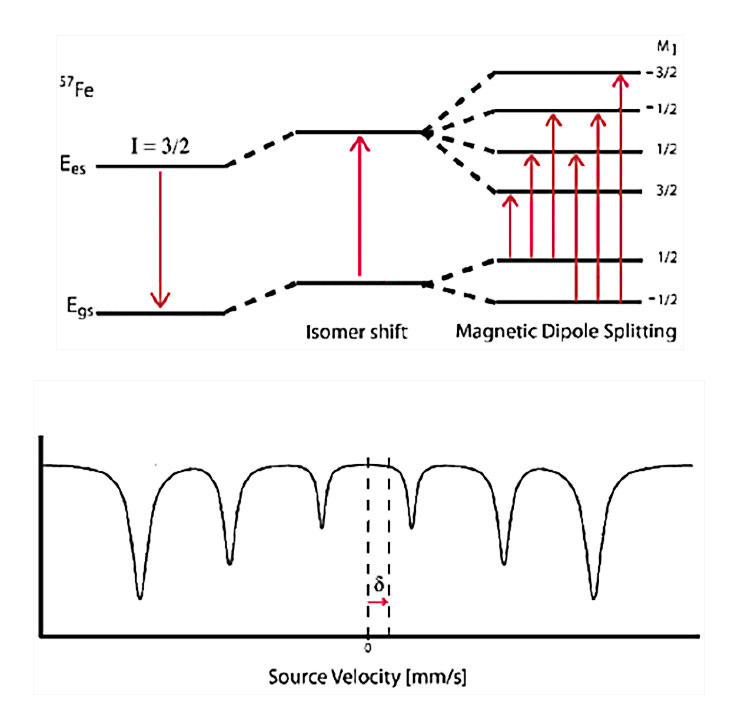 How to buy Mössbauer spectroscopy?