What is nuclear magnetic resonance? 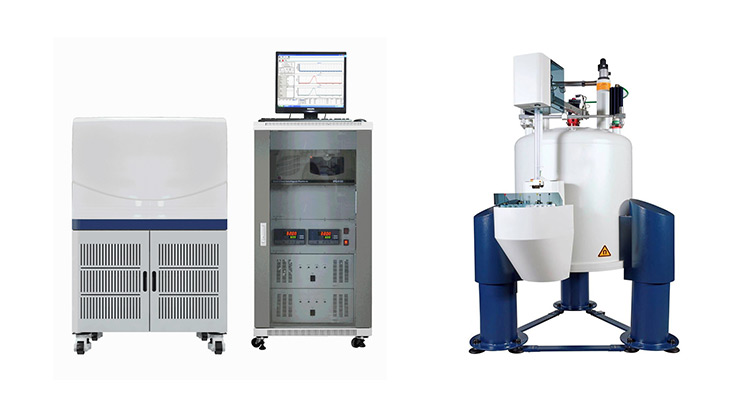 Nuclear magnetic resonance(NMR) refers to the study of the absorption of radiofrequency radiation by atomic nuclei and is one of the most powerful tools for qualitative and sometimes quantitative analysis of the structure and components of organic and inorganic materials.
Nuclear magnetic resonance is a physical process in which an atomic nucleus with a non-zero magnetic moment, under the action of an external magnetic field, undergoes a Seeman splitting of the spin energy level and resonantly absorbs radio frequency radiation of a certain frequency. Nuclear magnetic resonance spectroscopy is a branch of spectroscopy whose resonant frequencies are in the RF band and the corresponding jumps are those of nuclear spins at the nuclear Seeman energy level.

Structure identification of organic compounds
Nuclear magnetic resonance spectroscopy can be used to identify the structure of organic compounds, generally based on the chemical shifts; the number of coupled splitting peaks and coupling constants to determine the association of groups, and the integrated area of each H-peak to determine the proton ratio of each group. Nuclear magnetic resonance spectroscopy can be used for chemical kinetic studies, such as intramolecular rotation, chemical exchange, etc., because they all affect the conditions of the chemical environment outside the nucleus, and thus should be reflected in the spectra.

Analysis of multi-component materials
The NMR parameters of each component exist independently when there are many components of a material, and the compatibility between polymers is studied. When the identity between two polymers is good, the chirality time of the blends should be the same, but when the compatibility is poor, it is different.
In addition, it is also used in the study of polymers to study the polymerization reaction mechanism, polymer sequence structure, qualitative identification of unknown polymers, mechanical and physical property analysis, etc.

The working principle of nuclear magnetic resonance instrument is that in a strong magnetic field, the nucleus undergoes energy level splitting, and when external electromagnetic radiation is absorbed, a jump in the nuclear energy level will occur, which is known as the NMR phenomenon. When the frequency of the applied RF field is the same as the frequency of the nucleus spin-in, the energy of the RF field can be effectively absorbed by the nucleus, providing a boost to the energy level jump. NMR studies the absorption of RF radiation by a nucleus in a strong magnetic field.

The probe is installed in the magnetic pole gap and is used to detect the NMR signal, which is the heart of the instrument. The probe consists of a sample tube, an emission coil, and an amplifier. The sample to be tested is placed in the sample tube and then in the casing with the receiving and transmitting coils. The magnetic field and frequency source act on the specimen through the probe.
In order to average out the effects of the inhomogeneity of the magnetic field, the sample probe is equipped with a pneumatic turbine that allows the sample tube to rotate along its vertical axes at a rate of several hundred revolutions a minute.

High-resolution wave spectrometers require stable RF frequencies and functions. For this purpose, the instrument usually uses a quartz crystal oscillator at constant temperature to obtain the fundamental frequency, and then frequency doubling, frequency modulation and functional amplification to obtain the required RF signal source.
To improve the stability of the baseline and the magnetic field locking capability, the magnetic field must be modulated with audio. For this purpose, the audio modulated signal is obtained from the quartz crystal oscillator and fed to the probe modulation coil after power amplification.

The RF output containing the NMR signal obtained from the probe preamplifier is displayed on the oscilloscope and recorder after a series of detectors and amplification to obtain the NMR spectrum.

The variable temperature control part
Through the electric heating wire to raise the temperature, the accuracy can reach 0.1℃. For low-temperature experiments, the temperature of the probe is lowered by nitrogen gas blown from the Dewar bottle. 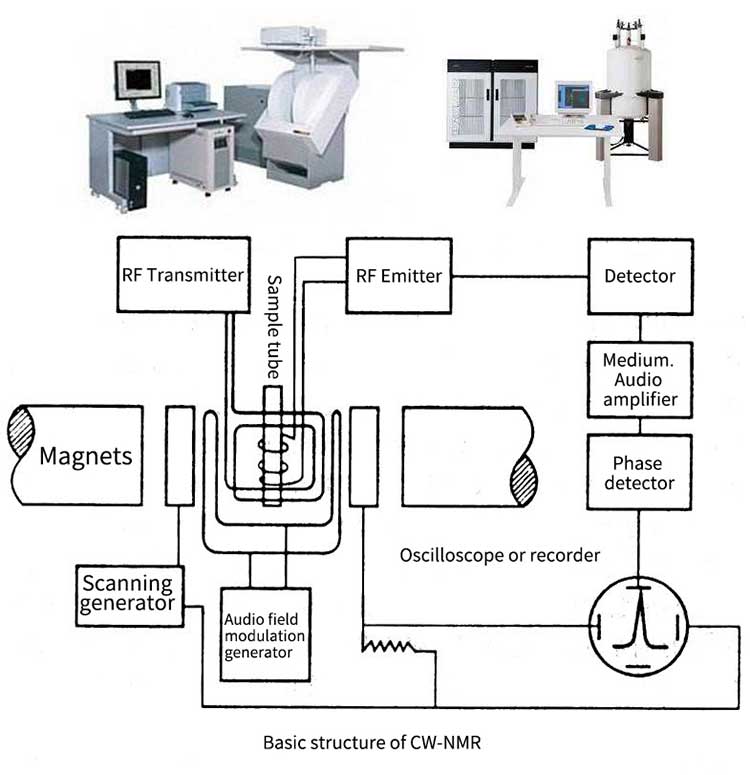 Continuous-wave NMR instrument means that the frequency of RF or the intensity of the external magnetic field is continuously varied, i.e., continuous scanning is performed until the observed nuclei are sequentially excited to undergo NMR. It is mainly composed of the magnet, RF transmitter, detector, amplifier, and recorder.

The advent of pulsed Fourier NMR in the mid-1970s led to the rapid development of 13C NMR research.
The pulse Fourier transform-NMR instrument differs from the continuous wave instrument in that it is equipped with a pulse program controller and data acquisition and processing system, and uses a strong and short (1~50 μs) pulse to excite all the nuclei to be measured simultaneously, turns on the receiving system in a time when the pulse terminates, and acquires the free induction decay signal (FID) The free induction decay signal (FID) is collected when the nuclei to be an exciting return to the equilibrium state through the relaxation process and then the next pulse is excited. The FID signal is a time-domain function, which is a superposition of signals of several frequencies and is transformed into a frequency-domain function by Fourier transformation in a computer to be recognized.
PFT-NMR is highly sensitive, can be used for low-abundance nuclei, has a short test time (one to a few seconds per sweep), and can also determine the relaxation time of nuclei, making the use of NMR to determine reaction dynamics a reality.

2. The Floor-mounted NMR spectrometer can be installed in a fume hood or on a bench, eliminating the need for additional infrastructure.

How to maintain nuclear magnetic resonance?

Preventing ferromagnetic objects from approaching the magnets of NMR
If ferromagnetic objects such as elevators, cars, cylinders, trolleys, watches, magnetic cards, pacemakers, etc. move near the Gaussian lines of the magnet and cut the magnetic lines of force, the electromagnetic energy in the superconducting magnet is easily converted into thermal energy rapidly and the temperature of the magnet rises, resulting in the rapid volatilization of liquid helium and the eventual loss of the superconducting properties (loss of super). High local temperatures can burn the magnet, high interlayer voltages can break through the insulation material, and excessive current growth can lead to mechanical damage. In this area, it is necessary to prevent ferromagnetic objects from approaching the magnet to avoid irreversible damage.

How to order nuclear magnetic resonance?

ANTITECK provide lab equipment, lab consumable, manufacturing equipment in life sciences sector.
If you are interested in our nuclear magnetic resonance or have any questions, please write an e-mail to info@antiteck.com, we will reply to you as soon as possible.
You may also like:
High Pressure Pump Used In HPLC
Field Spectrometer
Flame Photometer