What is a separating funnel? 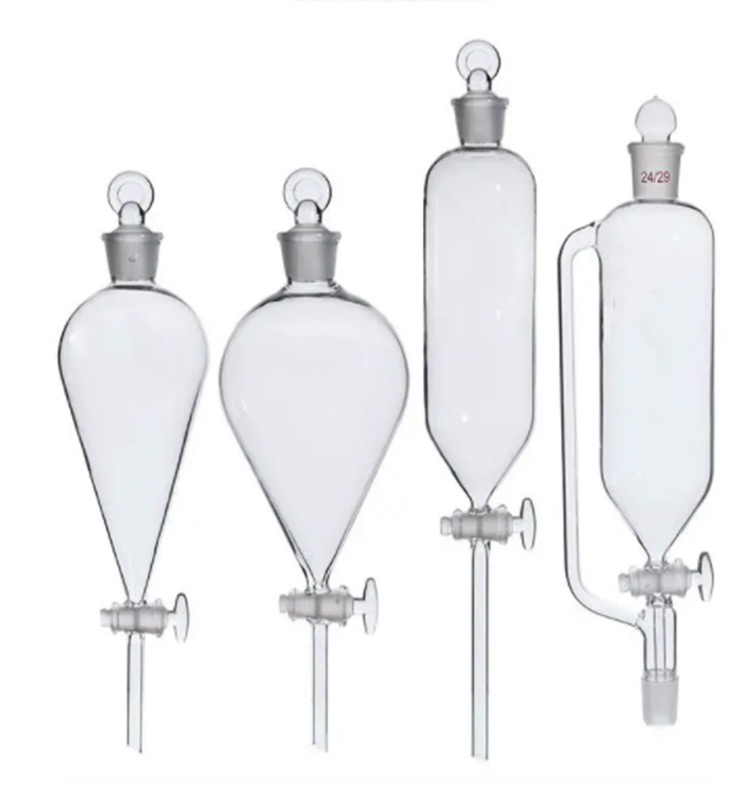 Chemical products play a very important role in our life and have a great impact on our life. There are many lab glassware in a chemical laboratory, such as glass funnels, the volumetric pipet, the round bottom flask, science beakers, etc. Among them, one kind of device that with a better function of the experimental utensils in scientific research and chemical experiment is called separating funnel, separatory funnel, separation funnel, or colloquially sep funnel.

The Definition
The separatory funnel is a spherical, cylindrical, or pear-shade glass funnel with a three-way piston and a lid, which is usually used in chemical experiments to separate two insoluble liquids. For example, when an organic solvent is used for extraction and separation from an aqueous solution, the lower phase of the two phases can be separated by the piston of the separation funnel. The design of the piston allows the convenience of the funnel. When a large amount quantity of liquid is separated, it is just needed to move the tee of the piston to flow the two liquids into the lower pipe together, without replacing it with another container. In this way, the experimental operation process is easy to control and the labor intensity is reduced. The piston is also often used for degassing which is needed to invert the separating funnel, open the piston and release the gas produced by the equilibrium of the two phases. In the meantime, a pear-shaped funnel, also known as a drip funnel, can also be installed on the reaction device, for drip-feeding liquid. There is a scale on some of the separation funnels. 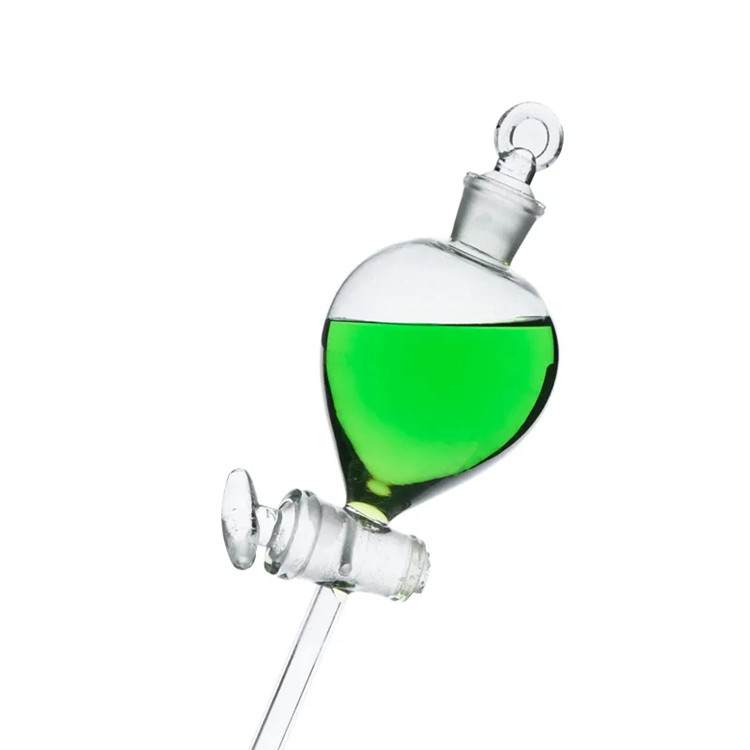 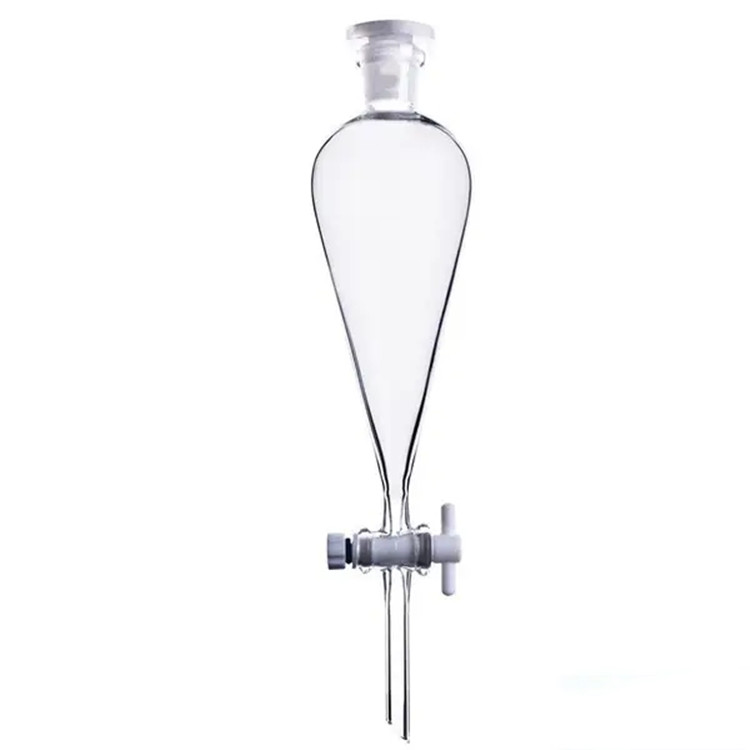 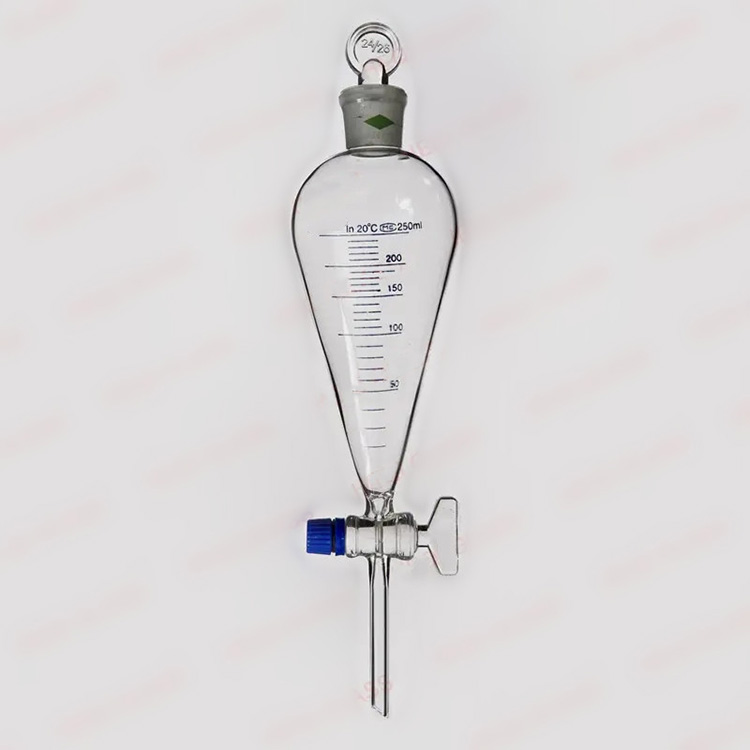 What is a separating funnel used for?

Use of Separating Funnel
There are two main functions of using a separatory funnel. One is as a reaction generator for mixing solid and liquid or just different kinds of liquid. In this way, the number of substances and the reaction rate can be better controlled in the experiments. Another is used for material separation and purification that can be formed after the extraction of insoluble two liquids for liquid separation.

How does a separatory funnel work?

Before using the liquid funnel, the operator should take out the plug core on the neck of the funnel and apply a small amount of petroleum jelly, but do not apply too much to prevent the flow hole from blocking. Then, insert the separating funnel into the plug groove and rotate it to make the oil film uniform and transparent, and make sure the funnel in the groove can rotate freely. After confirmation, close the cock, pour water into the funnel, and check whether the cock is leaking, do not leak liquid funnel can be used.

The amount of liquid added to the funnel cannot exceed 3/4 of the volume, and the funnel is not suitable for containing alkaline liquid. To prevent impurities from falling into the funnel, the plug should be covered.

When using with separating funnel, the operator should use a part of the left hand between the thumb and the index finger against the funnel ball, and use his thumb and index finger to control the piston to add liquid or solid. At this time, the small groove of the glass plug should be aligned with the small hole on the side of the funnel mouth, so that the liquid or solid can be added smoothly.

When the liquid in the separation funnel flows down, the piston can control the flow speed of the liquid. If the reaction in the glass funnel needs to be stopped, the operator should stop adding liquid and close the piston tightly. When releasing liquid, the groove on the grinding plug and the small hole on the neck of the funnel should be aligned, then the air inside and outside the funnel is connected, the pressure is equal, and the liquid in the funnel can flow out smoothly. When separating liquid, it should follow the principle of pouring in from the below mouth and pouring out from the upper mouth. The operator should open the piston to let the lower liquid all out, and close the piston. But the upper liquid should be poured out of the upper mouth.

Notices for Separatory Funnel in Laboratory
1) It is important to check whether the plug and piston core is matched with the separation funnel or not. If the accessories are not matched, it will cause liquid leakage or could not operate at all. If you want to use the non-original matched liquid separation funnel, you must test whether it is suitable for use and leakage after assembly first.

2) Apply a thin layer of grease, such as petroleum jelly, to the piston core. Be careful that the grease could not be put into the piston hole.

3) Insert the plug into the piston and close the piston after several turns to make the grease evenly distributed.

4) A suitable diameter rubber band should be covered in the groove of the plug core to prevent the leakage of liquid due to loosening of the piston core in the process of operation, or the failure of the experiment caused by the loss of liquid due to shedding.

5) Remove the piston core when a dry separation funnel is required. It is necessary to check whether the piston is clean and dry. If not, the operator should wash and dry it before use.

How to buy the separating funnel?

ANTITECK provide lab equipment, lab consumable, manufacturing equipment in life sciences sector.
If you are interested in our separating funnel or have any questions, please write an e-mail to info@antiteck.com, we will reply to you as soon as possible.
You may also like:
Laboratory Mixer
Industrial Centrifuge
Lyophilized Bead Forming System