What is separatory funnel?

A separatory funnel is a laboratory vessel, usually used in chemistry experiments. It consists of a hopper body, and a lid covered at the top of the hopper body. A piston with a three-way structure is installed at the lower mouth of the hopper, and the two passes of the piston are connected to the two lower tubes. The use of the hopper can make the experimental process easier to control and reduce labor intensity. When the amount of liquid to be separated is large, the two liquids in the hopper can flow to the lower pipe at the same time by moving the tee of the piston, without changing the container. The funnel is generally made of ordinary glass and has various types such as spherical, conical, and cylindrical, with specifications of 50, 100, 150, 250 ml, etc. The spherical funnel has a long neck and is mostly used as an instrument for adding liquid dropwise in gas-making devices. Conical separatory funnels have shorter necks and are often used as instruments for extraction operations. Of course, plastic separatory funnels are also available. 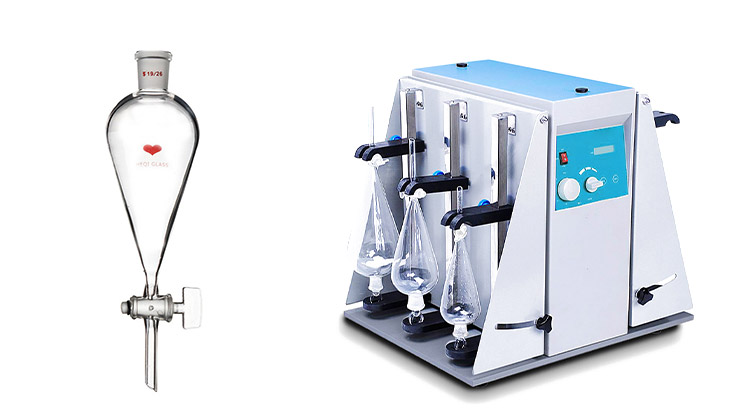 A. Check the tightness of the cap and cork of the separatory funnel

Select a partition funnel that is more than twice as large as the total volume of the extracted solution and extractant. To check whether a parting funnel is leaking, the operator usually adds a certain amount of water first and shakes it to see if it leaks.

a. The lid should not be oiled.
b. Do not use a leaky funnel to ensure safe operation.

The extracted solution and the extractant are poured in separately from the upper part of the separatory funnel, and the cap is closed. The choice of extractant should be based on the solubility of the extracted substance in this solvent, while it should be easy to separate from the solute, with a low boiling point solvent. Water-soluble larger available benzene or generally less water-soluble substances can be extracted with petroleum ether; water-soluble large with ethyl acetate. The liquid is divided into two phases. If necessary, use a glass separatory funnel to add material.

a. Vibrate the separatory funnel to bring the two liquid phases into full contact. The shaking operation is generally done by tilting the funnel so that the top of the funnel faces slightly downward. At this point, the liquid is mixed into an emulsion.

b. Vibrate with great force while preventing liquid leakage.

c. The extraction oscillation is completed with deflation. After shaking, let the parting funnel remain tilted. Unscrew the cork and release the vapor or gas produced to equalize the internal and external pressure and the gas is released.

a. Remember that the top of the funnel should be tilted down when deflating, and there should be no liquid at the bottom.

b. Resting the parting funnel. The purpose of standing is to stratify the unstable emulsion. The general situation must be about 10min, more difficult to stratify the liquid must be more long-standing liquid into two clear layers Note: In the extraction. Especially when the solution is alkaline, often produces an emulsification phenomenon, affecting the separation. The method of destroying emulsification is to gently rotate the funnel to accelerate the stratification.

c. If the emulsification occurs due to partial mutual solubility of two solvents (water and organic solvents), a small amount of electrolyte (such as sodium chloride) can be added, because the use of salt precipitation can destroy the emulsion. If emulsification occurs because of the small density difference between the two phases, you can also add electrolytes to increase the density of the aqueous phase.

d. If emulsification occurs because the solution is alkaline, it can often be eliminated by adding a small amount of dilute hydrochloric acid or using filtration and other methods. Depending on the situation, the operator can also add ethanol or sulfonated castor oil to eliminate emulsification.

Difference between a separatory funnel and a dropping funnel

A dropping funnel is used for continuous drip addition of reagents in a reaction system. This kind of continuous dripping time is longer and the total volume of dripping is larger, so there is no way to do continuous dripping with a dropper or pipette. And the valve on top is used to control the flow rate. A separatory funnel is used to separate two incompatible liquid phases (liquids). For example, water and oil are incompatible with each other, if you are given a bucket of oil mixed with water, you need to separate out the water, the first way is to take a spoon to skim out the oil, leaving only the water at the bottom; the second way is to use the method of liquid separation, drilling a small hole in the bottom of the bucket to release the water, leaving only the oil. And the valve on top is to control the speed of the small hole to release water.

The main functions of the spherical dropping funnel are as follows.

a. In the preparation of some gases (especially toxic gases), the drop acceleration of the liquid is controlled so that the reaction rate can be controlled. This is especially true for some reactions that are more violent, produce fumes in the container or prepare colored gases. For example, in the laboratory preparation of chlorine gas (especially the reaction between potassium permanganate and concentrated hydrochloric acid to make chlorine gas), nitrogen dioxide, manganese dioxide catalyzed decomposition of hydrogen peroxide to make oxygen and laboratory preparation of acetylene, it is not easy to control the reaction rate by observing the speed of liquid dripping in the reaction vessel. The concept of green separating funnel chemistry is to prevent and control the reaction in the first place, rather than adjusting the reaction when it is found to be too fast or too slow. The structure of the lower end of the dropping funnel determines that by its drip addition of liquid during gas preparation, it is very convenient to observe how fast or slow the drops are added to the sphere of the lower stem.

b. For some reversible reactions, the equilibrium is induced to keep moving toward the target product by continuously adding drops of liquid while distilling out the reaction products. In experiments, the lower end of the dropping funnel should extend below the liquid level. In the existing grinding mouth glass apparatus, either atmospheric pressure cartridge dropping funnel or constant pressure cartridge dropping funnel, its lower end are double casing, and the inner tube is slightly longer than the outer tube. This design is mainly used for the dripping of liquids in organic reactions, and the outer tube has an abrasive mouth for insertion into the reaction vessel to seal the contact, and also plays a role in fixing the dropping funnel. The inner tube is connected to the funnel container through a piston for liquid drip addition. This structure ensures that the liquid is added in drops rather than flowing along the reactor wall, which makes it easy to observe the speed of liquid drip addition, and the liquid drops into the middle of the container to facilitate the mixing of the reactants, improve the reaction rate and reduce side reactions. This is not conducive to the operation of the experiment and may slow down the reaction rate or reduce the yield.

There is a clear structural difference between a dropping funnel and a dividing funnel. Both have their respective uses. The main function of a spherical partition funnel is to quickly perform a shaking and resting partitioning of the mixture. The spherical partition funnel can be used in some gas preparation experiments where the reaction is gentle, such as the reaction of zinc with dilute sulfuric acid to determine the reaction rate. However, for laboratory preparation of chlorine, hydrogen peroxide catalytic decomposition of oxygen, nitrogen dioxide, and acetylene, and other gas preparation, as well as some need to insert the liquid below the surface of the drop experiment is not suitable to replace the spherical dropping funnel with a spherical dispensing funnel, but preferably with a spherical dropping funnel.

How to buy separatory funnel?

ANTITECK provide lab equipment, lab consumable, manufacturing equipment in life sciences sector.
If you are interested in our separatory funnel or have any questions, please write an e-mail to info@antiteck.com, we will reply to you as soon as possible.
You may also like:
Laboratory Furniture
Laboratory Aspirator
Vacuum Desiccator