What is secondary ion mass spectrometry?

Secondary ion mass spectrometry(SIMS) is the process of sputtering secondary particles from the surface of a sample by bombarding the surface with a high-energy primary ion beam, which causes the atoms or groups of atoms on the surface to absorb energy, and these charged particles pass through a mass analyzer to obtain a map of the sample surface.
In conventional SIMS experiments, energetic primary ion beams, such as Ga, Cs, or Ar ions, are focused on the surface of a solid sample under ultra-vacuum conditions. The primary ion beam interacts with the sample and secondary ions are sputtered and desorbed from the material surface. These secondary ions are then extracted into a mass analyzer, which presents a mass spectrometric map with the characteristics of the analyzed surface and produces elemental, isotopic, and molecular information with sensitivity in the ppm to ppb range. There are three basic types of SIMS instruments most commonly used in this field, each using a different mass analyzer.

The field of SIMS mass spectrometry is growing rapidly and has very important applications in the fields of elemental doping in semiconductor manufacturing, component measurements of thin films and other inorganic materials, isotopic ratios in the universe, and trace elements in the Earth.
The analysis of thin film structures by secondary ion mass spectrometry is a unique analytical tool, especially for the analysis of materials in different thin layers and the interaction between two adjacent layers. The analysis of features, defects or contamination at the sub-micron scale is crucial for many industrial applications, such as: semiconductor device processing, hard disk head processing, special reflective surfaces, composite materials, etc. composite materials, etc.
In addition, the use of secondary particle mass spectrometry is a powerful tool for exploring the nature of frontier issues in science and technology, such as the visualization of single cells in the life sciences, where information on drug uptake, distribution, and metabolism in cells can be obtained, and the localization of drugs in tissues or cells can be studied, which is important for improving drug targeting and rational drug design.
In conclusion, secondary ion mass spectrometry has a wide range of applications: metals, semiconductors, microelectronics, aerospace, automotive, chemical, biomedical, single-cell, environmental and other fields, especially in the traditional semiconductor industry, integrated circuits, solar photovoltaic cells, etc. Analysis has a very important role in it. 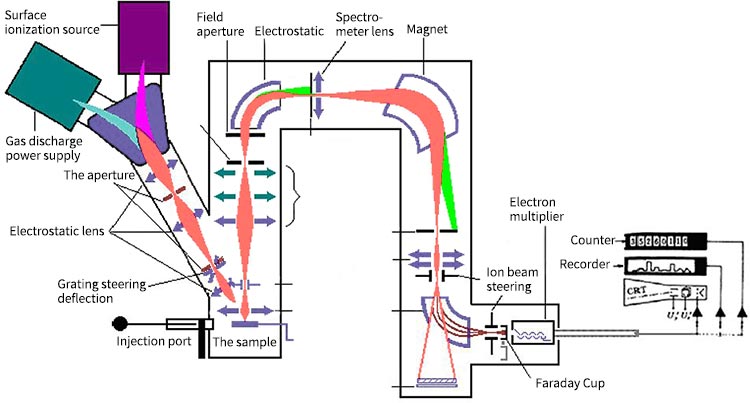 1. The secondary ion mass spectrometer is capable of analyzing all elements including hydrogen and can monitor isotopes (m different).

3. SIMS can analyze compounds and obtain information about their molecular weight and molecular structure.

4. The secondary ion mass spectrometer has a high sensitivity for many components, and some impurities are detected up to ppm (10-6) and ppb (10-9) levels, which is one of the most sensitive for surface analysis (trace B, O, etc.).

5. SIMS mass spectrometry can be used for micro-area composition analysis and depth profiling, and can also obtain a certain degree of lattice information.

In TOF-SIMS, the secondary ions are extracted to the field-free drift tube, and the secondary ions arrive at the ion detector along the established flight path. Since the speed of a given ion is inversely proportional to its mass, its time of flight will vary accordingly, with heavier ions arriving at the detector later than lighter ones. This type of mass spectrometer can detect secondary ions of all given polarities simultaneously with excellent mass resolution.
In addition, because such mass spectrometers are designed to utilize pulsed ion beams operating in the very low current (pA) range, they are useful for analyzing surfaces, insulators, and soft materials that are vulnerable to chemical damage from ions.

Fan-field secondary ion mass spectrometers usually use electrostatic and fan-field analyzers to analyze the velocity and mass of sputtered secondary ions. The fan-shaped magnetic field deflects the beam so that lighter ions deflect more than heavier ones, which have more momentum. As a result, ions of different masses will separate into different beams. Electrostatic fields are also applied to secondary beams to eliminate chromatic aberrations. These instruments are useful for deep analysis because of their higher operating currents and continuous beams. However, when these instruments are used for surface analysis and characterization of samples prone to charge and/or damage, they are not effective.

b. In the early stage, organic solvents will enter the pump with the detection of samples in the mechanical pump, so it is necessary to regularly open the gas shock valve and shock the gas for about 20min. The gas shock time should not be too long, because too long will lead to too fast consumption of pump oil. According to the amount of detection to adjust the frequency of gas, is generally recommended once a week.

c. The ion source cavity, sampling cone hole, and cover should be cleaned with dust-free paper and 50% methanol-water, usually once a week.

e. General maintenance in addition to replacing the oil pump, does not need to discharge under the vacuum condition, internal cleaning and maintenance of mass spectrometry are generally less do, suggest to maintenance engineer to do, internal metal parts can be polished with alumina powder, other components be careful not to run into organic reagents, especially the sealing ring and so on.

ANTITECK provide lab equipment, lab consumable, manufacturing equipment in life sciences sector.
If you are interested in our secondary ion mass spectrometry or have any questions, please write an e-mail to info@antiteck.com, we will reply to you as soon as possible.
You may also like:
HPLC System
Organic Mass Spectrometry
Inorganic Mass Spectrometry