What is x-ray detector?

X-ray detector is the core of CT imaging, converting "X-rays" that are invisible to the naked eye into digital signals that can eventually be transformed into images, or is a device that converts X-ray energy into electrical signals that can be recorded. It receives the radiation and generates an electrical signal proportional to the intensity of the radiation. Usually, the strength of the radiation signal received by the detector depends on the density of the tissue within the body section at that site. Tissues with high density, such as bone, absorb more x-rays and the detector receives a weaker signal; tissues with lower density, such as fat, absorb fewer x-rays and the detector gets a stronger signal. This nature of different tissue absorption values of x-rays can be expressed by the absorption coefficient m of the tissue, so the strength of the signal received by the detector reflects the different m values of human tissues, to make a judgment on the nature of the tissue.

X-ray detector was first used in medical treatment to do safety for human health. With the development of industry, X-ray is most commonly used in industrial nondestructive testing, now mainly divided into laboratory electronics semiconductor research, lithium new energy, and other high-tech industries, as well as pan-industrial nondestructive testing, public safety, foreign object detection, and other branches. However, X-ray inspection can be used in the manufacturing process of various products, including food, footwear, pharmaceuticals, wood, etc., basically covering all aspects of life. 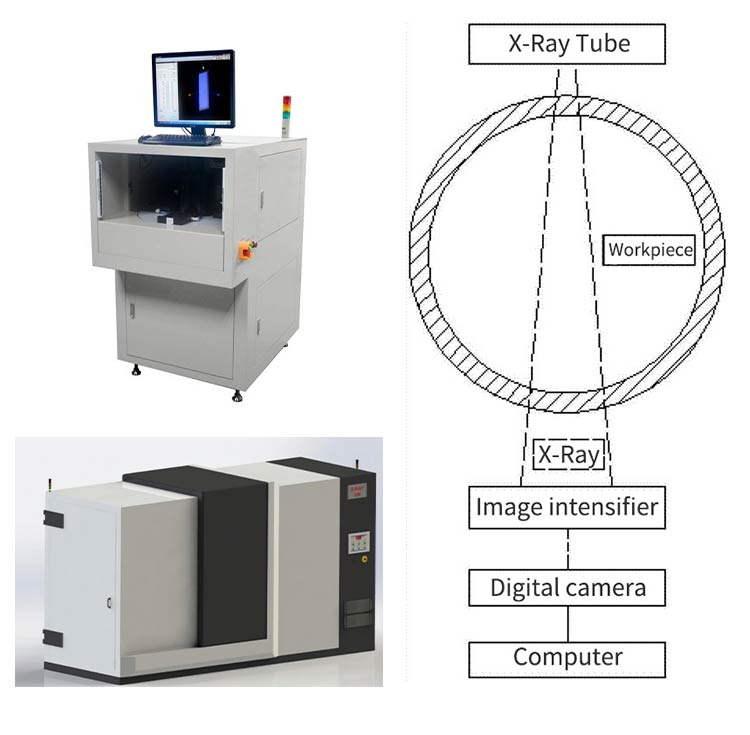 The basic working principle of X-ray detector is as follows:
X-rays used in X-ray detectors are electromagnetic waves and photons of very short wavelength.
Penetrating X-rays can penetrate materials that ordinary visible light cannot penetrate. The ability to penetrate is related to the wavelength of the X-rays, the density and thickness of the material penetrated. the shorter the wavelength of the X-rays, the greater the penetration; the lower the density and the thinner the thickness, the easier the X-rays penetrate.
When ionizing X-rays or other rays (such as gamma rays) are absorbed through a material, the molecules that make up the material can be broken down into positive and negative ions, called ionization. The number of ions is proportional to the number of X-rays absorbed by the substance. By ionizing air or other substances and measuring the ionization with an instrument, the number of X-rays can be calculated. It is on this basis that the test equipment enables the flaw detection of parts. x-rays also have functions such as sensitization and fluorescence.

X-ray detector structure has a vacuum tube located in the tube sleeve as a rotating anode type of ray tube. The tube is equipped with an anode, cathode, filament and rotor, and a stator coil is located outside the vacuum tube at the corresponding anode rotor. The stator coil is fed with current to produce a rotating magnetic field, which is generated in the copper rotor.
A typical X-ray detector includes: scintillator, photoelectric conversion array and electronics section. There are also accessories such as software and power supplies.

The four main advantages of the X-ray detectors are as follows:
Accurate positioning, easier image identification
Flat panel detector technology mainly projects three-dimensional objects onto a two-dimensional plane, which tends to cause superimposition of image information, making accurate positioning and quantitative measurement of the target very difficult without experience if one wants to obtain information on the image. Industrial CT can give two-dimensional or three-dimensional images when inspecting workpieces, and the target to be measured is not obscured by the surrounding detailed features, and the resulting image is very easy to identify. The specific spatial location, shape, and size of the target features can be obtained directly from the image.

Images are easier to store, transmit, analyze, and process
Because the X-ray detector image is intuitive, the image grayscale corresponds to the material, geometric structure, components, and density characteristics of the workpiece, not only can get the shape, location, and size of the defect and other information, combined with density analysis technology, but also to determine the nature of the defect, so that the long-troubled NDT personnel defect space positioning, depth quantification and comprehensive characterization of the problem has a more direct way to solve.

Gas detectors are gas-based detection media, mostly filled with a mixture of mainly inert gases, and voltage chambers are added to both poles of the detector. The shape and size of the chamber structure will be different depending on the gas detector. When the detector is used, we mostly increase the internal gas atmospheric pressure to 2 to 3 atmospheres, which can effectively improve the detection efficiency of the gas detector. The working principle of gas detector is to obtain nuclear radiation information by collecting ionization charge, because the ray particles produce electron-ion pairs in the sensitive volume, and in the ionization chamber the electron-ion pairs move towards the inner wall and the central filament respectively due to the collection of electric field, thus capturing the required information through the detector. Different types of ionization chambers for gas detectors are basically identical in structure. Typical structures are flat and cylindrical.
Gas detectors are simple to prepare, reliable, inexpensive, and easy to use, and have a wide range of applications. since the 1970s, gas detectors have developed considerably, gaining new applications in high-energy physics and heavy ion physics experiments, and in nuclear medicine, biology, astrophysics, condensed matter physics, and plasma physics.

Before introducing scintillation detectors, it is important to understand the light pulse, when the scintillating material is irradiated by radiation or other high-energy particles will be excited to block the medium atoms, the excited atoms from the excited state back to the ground state will form a fluorescent pulse [7]. Scintillation detectors work precisely by taking advantage of this property of certain substances that glow under the action of nuclear radiation. A scintillation detector is a combination of a scintillator enclosed in an opaque housing, a collection system for receiving light, a light-detecting optoelectronic device for photoelectron conversion such as a phototube, a photomultiplier, a photodiode, and a subsequent circuit output system for the photodetector. The combination of these devices is collectively referred to as a scintillation detector system.
The working principle of a scintillation detector is: radiation incident on the scintillator emits fluorescence; fluorescent photons are collected into the photocathode of the photomultiplier tube and converted into photoelectrons through the photoelectric effect; photoelectrons are multiplied through electron motion and between the levels of the photomultiplier tube, and finally the signal is output in the anode output circuit. Scintillation detectors have a wide detection dynamic range and are suitable for radiation particles with energies in the range of 1 eV to 1 GeV [8], and nowadays they have become the most commonly used detectors and are widely used in many fields such as high-energy physics, geophysics, radiation medicine, radiochemistry, etc. The main types of applications can be classified as energy spectrum measurement, dosimetry, intensity measurement, and time measurement. 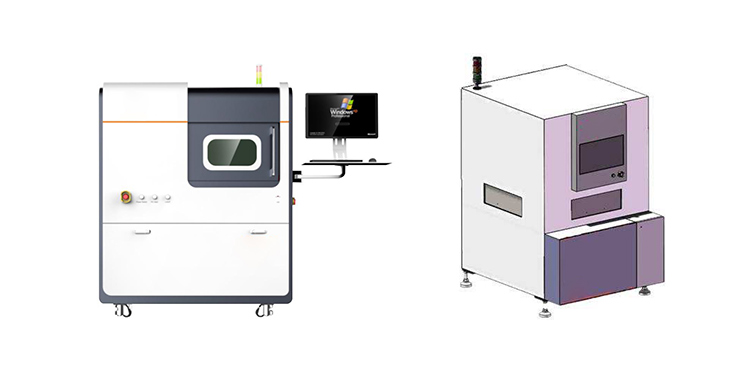 2. High dynamic range due to zero background noise and simultaneous reading and writing

How to order x-ray detector?

ANTITECK provide lab equipment, lab consumable, manufacturing equipment in life sciences sector.
If you are interested in our x-ray detector or have any questions, please write an e-mail to info@antiteck.com, we will reply to you as soon as possible.
You may also like:
Vacuum Pump
Analytical Balance
Safety Shower