What is organic mass spectrometry?

Organic mass spectrometer can also be used in conjunction with HPLC and a tandem mass analyzer to establish fingerprints of active ingredients of traditional Chinese medicine.

With the high sensitivity of organic mass spectrometry and standards, we can carry out pharmacokinetic studies, doping detection, and trace explosives detection.

The basic working principle of organic mass spectrometry is to ionize the measured substance by electron bombardment or other means to form ions with various mass-to-charge ratios (m/e), and then use electromagnetism to separate the ions by different mass-to-charge ratios and measure the intensity of various ions to determine the molecular weight and structure of the measured substance.

Mass analysis system
The ion stream from the ion source contains ions with different mass-to-charge ratios. As an organic mass spectrometry analysis, the information on how many mass-to-charge ions the compound can produce and their respective intensities (earlier the name abundance was also used) is necessarily obtained using a mass analysis system. The various ions with different mass-to-charge ratios are separated spatially or temporally and arranged according to their mass-to-charge ratio for detection by the ion collection system.
There is a distinction between static and dynamic mass spectrometry systems. Static mass analyzers are those in which parameters such as electrical and magnetic fields and ion deflection orbits that play a role in mass-to-charge ratio separation are stable at different times. Changing some of these parameters over time, such as the magnetic field scan, is required to record the spectrum and not the mass separation. A dynamic mass analyzer has to use alternating or periodically varying electric and sometimes also static magnetic fields to achieve mass separation in space or time so that those of its parameters are time-varying.

Ion collection system
The ion collection system includes the detection of ions and signals acquisition and amplification, and here we focus on the detection of various ions. Sensitivity, accuracy, and response time are the main indicators for evaluating detector performance, and they vary depending on the operating requirements of various mass spectrometers. For example, isotope ratio determination requires high accuracy of ion intensity determination and allows slow scanning speed, while organic analysis by GC-MS requires fast scanning, such as up to 0.1s/decade multiplication and fairly high sensitivity. For the former, slow-response Faraday cups are used (determination accuracy better than 0.1%); for the latter, fast-response electron multipliers are used (sensitivity several hundred times higher than Faraday cups, but accuracy up to 0.5%). The commercially available ion detectors are Faraday rings, cascade electron multipliers, electron multipliers with continuous polarization, photomultipliers, and microchannel plates, all of which are detectors used in electrical measurements.

There are three main types of organic mass spectrometers, 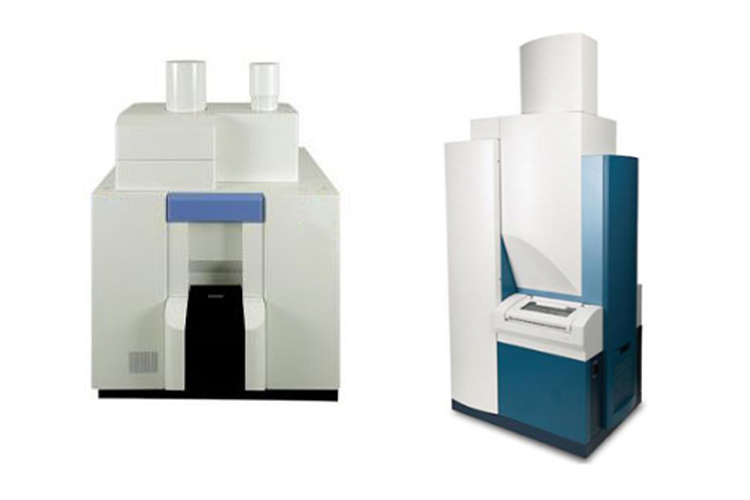 MALDI-TOFMS can measure up to hundreds of samples per day, which is especially suitable for high-throughput screening of biological macromolecules such as proteins.

Fourier transform mass spectrometer is the product of the combination of ion cyclotron resonance spectrometry and modern computer technology.

How to maintain organic mass spectrometry?

Inspection of the gas chromatography section
Air leaks in the gas chromatography section usually occur at the internal carrier gas fittings, spacer positioning nuts, column nuts, etc. An appropriate amount of acetone can be applied to the above locations, one at a time, in the order of proximity to the mass spectrometry section. After a suitable time, observe the peaks in the background pattern. If there is a steep and significant climb at m/z58 and m/z43, it indicates that there is an air leak at the location where the acetone has just been applied.

Pump oil replacement: Always observe the pump oil color and replace it immediately when it turns yellowish brown. If the instrument is used frequently and the gas is dirty, it is required to be replaced at least once every six months, and the amount of pump oil added should not exceed the uppermost liquid level.

The heat dissipation filter should be cleaned regularly, do it once every two months), and try to open the upper cover when using the room without air conditioning in summer, to prevent the instrument from affecting the heat dissipation.

Capillary tube when not connected to the external instrument, do not place directly on the dirty table, as far as possible suspended placed; capillary tube internal filter to be cleaned regularly, in the process of disassembly and assembly take care not to lose parts.

In the process of transporting organic mass spectrometry instruments, if there is an oil pump that needs to drain the pump oil, if the pump oil is clean can be collected later to continue to use), remove the RF head, and transported separately.

How to buy organic mass spectrometry?

ANTITECK provide lab equipment, lab consumable, manufacturing equipment in life sciences sector.
If you are interested in our organic mass spectrometry or have any questions, please write an e-mail to info@antiteck.com, we will reply to you as soon as possible.
You may also like:
Carbon Silicon Analyzer
Nitrogen Generator
Kipp’s Apparatus