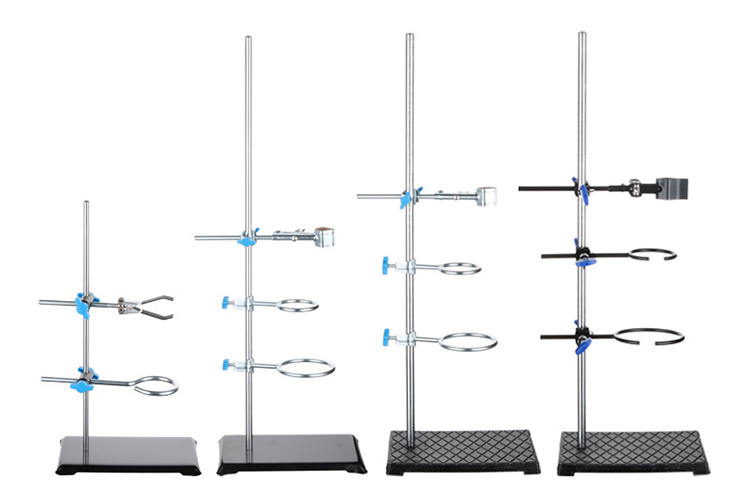 Retort stand bosshead and clamp
In chemistry laboratories, a retort stand, also called a clamp stand, a science retort stand, a ring stand, or a support stand, is a piece of scientific equipment intended to support other pieces of equipment or glassware, for example, for instance, burettes, test tubes, and flasks.

A typical ring stand consists of a heavy base and a vertical rod, both of which are usually made of metal. A number of accessories, such as various types of clamps and rings, can be attached to the rod by thumbscrews, at whatever both height and direction are necessary to support the target device.

Retort stands commonly have a cast iron base of about 200 x 125 mm. In this size, the rod may be up to 750 mm and screws into a female thread in the base. The height of the retort rod is sufficient for most experiments and usually fits within fume hoods and glove boxes. If a taller retort rod is required, the solid base is usually replaced by a tripod for stability when supporting larger apparatuses, such as extremely large tubes, bulk chemical bottles, etc. The height can be adjusted by moving the attached point of the stand and the support equipment. The base lowers the center of gravity of the stand, thus increasing stability.

Retort stands are often used in the chemistry laboratory for distillation experiments (such as organic distillations) and titrations (where they hold a burette). They are also used as support infiltration. 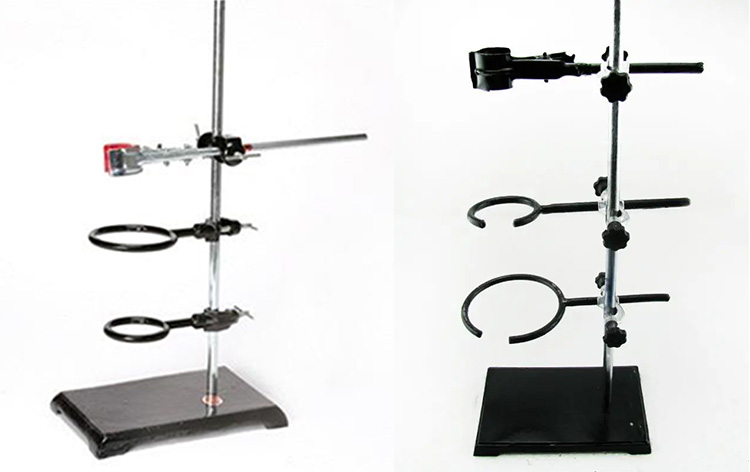 The use of retort stand

Retort stand and clamp
Retort stands are devices used to hold a piece of equipment at an elevated or extended position.

The retort stand science used in the laboratory is generally divided into two parts: one retort ring and two retort clamps. They can be adjusted and moved up and down through the knob to achieve the purpose of fixing and adjusting the instrument at any time as required. Generally, the retort ring should be fixed first. If the sample needs to be heated in the experiment, it is necessary to reserve a space by the retort ring in advance for the alcohol lamp, high-temperature blowtorch, or Bunsen lamp. You need to check the airtightness of the whole device and then add retort clamps to make it firm. If you need to install an easily removable round bottom instrument, you’d better hold it by hand until the clamping instrument is installed. The clamps cannot be set too tight to avoid damaging the glass instrument. The damaged glassware that is not found in the lab may probably become a safety hazard in the experiment.

Do not put the instrument that is not suitable for heating directly on the retort ring or put it on the asbestos wire for heating. In addition, a water bath before being heated is needed for some sophisticated glass instruments. 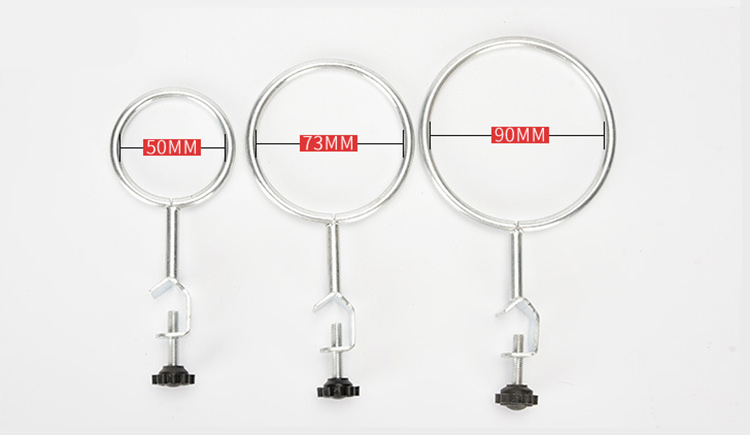 Retort stand use
1) Holding clip and retort clamp should be used together. Holding clips included tweezers, test tube holder, etc. Two ends of the clamp are rotating handles, one end of which is fixed on the column, and the other end is fixed with the retort clamp. The concave side of the latter end should be upward to support and fix the retort clip.

3) The rubber hose or cloth strips can be covered on both sides of the iron clips for easy operation when using iron clips to fix containers with smaller diameters. 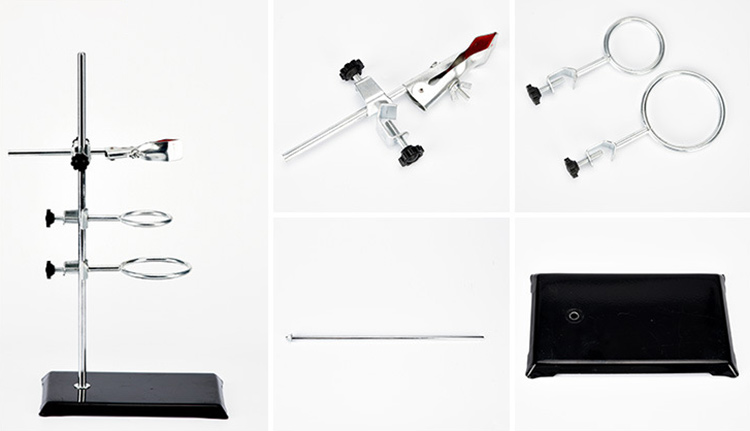 5) When the instrument is fixed on the iron clamp, the components must be on the same side as the base of the retore stand, so as to avoid the gravity center of the whole device exceeding the base and causing overturn of the stand.

6) Rust protection is very important. Each part of the retort stand is iron qualitative material, which needs to protect with silver powder or dark corrosion-resistant paint. When having the experimental operation, the rust prevention layer should be taken good care of and cannot be damaged. Remember, do not let acid or lye drip on the retort stand.

7) Many iron clips and rings are fixed on the posts with double-notched screws. The two gaps are perpendicular to each other. One is set on the column, and the other is inserted into the iron clip bar or iron ring bar. The gaps of them must be upward, so as to avoid falling due to screw loosening in the process of loading and unloading or use.

9) Wooden retort stand is not often used in the lab. Stainless steel made is the most popular.

1) To ensure a safe and convenient reaction operation with a heating vessel or corrosive substance in equipment in the lab, a retort stand is needed to place and fix the chemical reaction device.

2) According to the different chemical reactions, the iron rod can be equipped with an up and down moving retort ring, retort clamp, and other related instruments.

3) If heating is needed during the experiment, a heating device such as an alcohol lamp can be placed on the retort stand.

The process of separating the components or substances from a liquid mixture by using selective boiling and condensation is called distillation. As we all know, distillation is a physical separation process, not a chemical reaction. 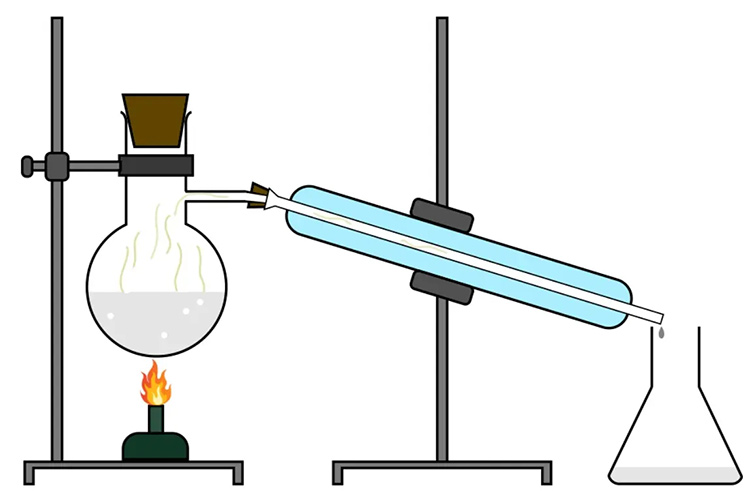 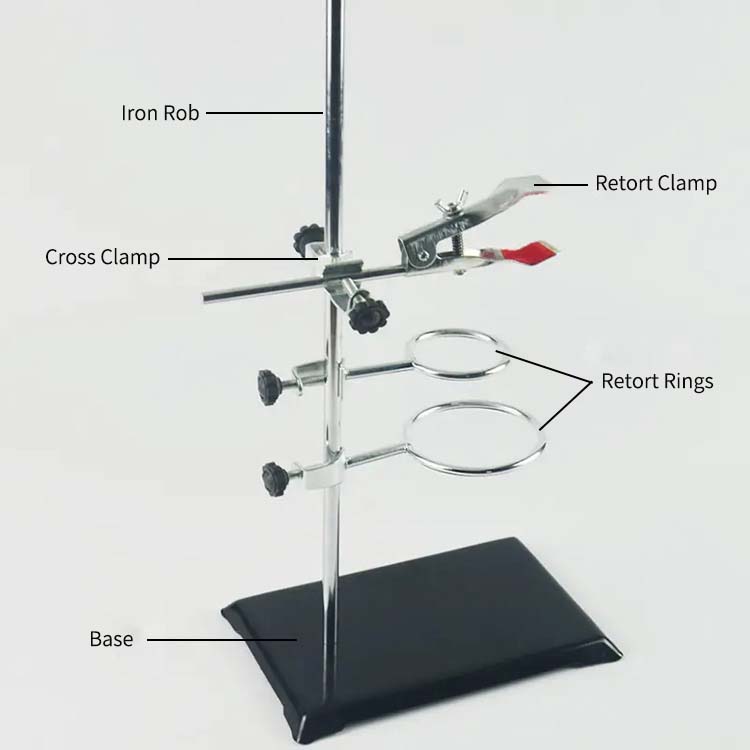 How to purchase retort stand?

ANTITECK provide lab equipment, lab consumable, manufacturing equipment in life sciences sector.
If you are interested in our retort stand or have any questions, please write an e-mail to info@antiteck.com, we will reply to you as soon as possible.
You may also like:
CO2 incubator
Industrial centrifuge
Microcentrifuge tube