What is spin column? 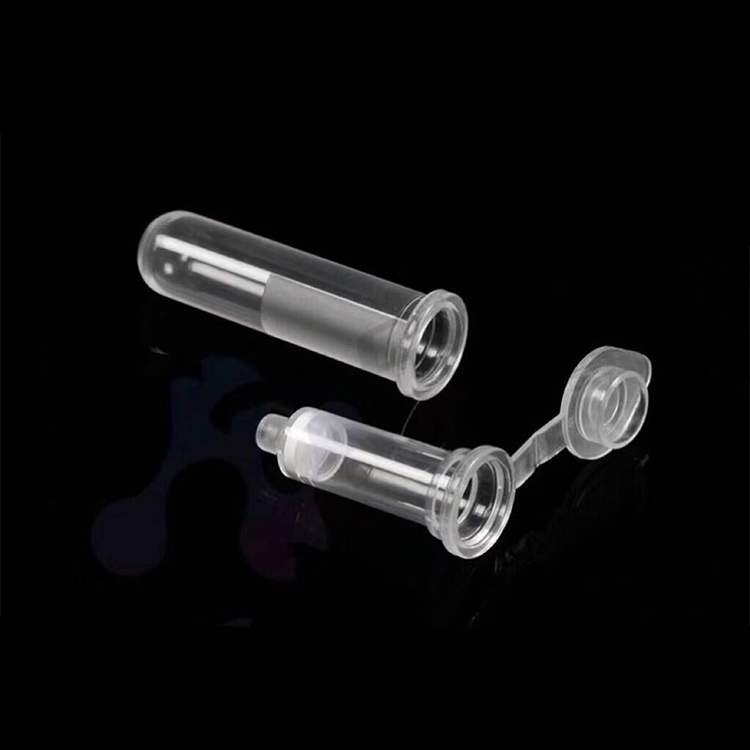 Spin columns can be used for DNA/RNA extraction and refinement of various materials. The spin column contains an anion and cation exchange resin. In the ion exchange reaction, cations (such as Na+) in the water are transferred to the resin, while an exchangeable H+ on the ion exchange resin is transferred to the water. The process of transferring Na+ from the water to the resin is the ion replacement process. And the process of exchanging H+ on the resin for water is called the freeing process. Thus, as a result of the replacement and freeing process, Na+ and H+ exchange places, and this change is called ion exchange. Similarly, the negative resin displaces OH- to produce H2O. Resin exchange is characterized by high exchange capacity, low water flow resistance, high mechanical strength, and good chemical stability. At the same time, resin exchange has a reversible exchange reaction, which facilitates regeneration and the selection of various ion adsorption to achieve the purpose of salt removal and purification.

Spin-column has the characteristics of simple operation, high recovery rate, and stable performance. At present, spin columns are popular with most laboratories and companies at home and abroad. They use silica membranes as specific adsorbent materials for nucleic acids while remaining largely non-absorbent to other biological materials. This guarantees the maximum recovery of DNA\RNA from the sample while removing other impurities.
Spin columns assembly line

The collection tubes are made of medical-grade polypropylene in 2ml and 50ml volumes.

The column is made of medical-grade polypropylene with a mesh bottom or with a connector and has a capacity of approximately 1ml or 25ml.

The gasket is a special fiber material that is resistant to acids and bases and most organic solvents and does not adsorb to most biomolecules.

A. Spin columns for DNA purification.

B. Spin columns for RNA purification.

F. The spin column is filled with a large number of glass fiber membranes, which is a technique based on the glass fiber extraction method for rapid extraction of nucleic acids.

Ethidium bromide binds to DNA by embedding itself between bases, which in turn causes the double helix to unwind, increasing the length of the linear DNA. To compensate, superhelical units are introduced into the closed-loop plasmid DNA. The superhelical units increase considerably, thus preventing the further embedding of the ethidium bromide molecule. The linear molecule, however, is not limited and can continue to bind more ethidium bromide until saturation is reached (approximately 1 ethidium bromide molecule per 2 base pairs). The buoyant density of linear and closed-loop DNA molecules in cesium chloride degrees containing saturating amounts of ethidium bromide differs due to differences in the amount of dye bound. For many years, cesium chloride-ethidium bromide gradient equilibration centrifugation has been the method of choice for preparing large amounts of plasmid DNA. However, this process is expensive and time-consuming, and many alternative methods have been developed for this purpose. Methods that included separation of plasmid DNA and host DNA using ion-exchange chromatography, gel filtration chromatography, graded precipitation, etc. Among them, the Polyethylene glycol graded precipitation method is the most commonly used.

a. Direct purification of the product

b. Silica column for DNA extraction

What adsorbs DNA in most centrifugal columns in spin column centrifuge is a silica membrane, which is a layer of glass fibers. Its surface has a large number of modified silicon hydroxyl groups (Si-OH). The silica hydroxyl group is negatively charged after dissociation in solution, and then forms an electric bridge with positively charged salt ions and negatively charged DNA, which is adsorbing DNA, making DNA double-stranded into single-stranded and not eluted by biomolecular solvents. However, it can be hydrated by water-soluble buffer and then be recovered quantitatively, thus achieving purification and separation.

After PCR amplification is completed, except for DNA fragments, there are also ions, dNTP, primers, and polymerase present in the reaction system, which will affect subsequent cloning and sequencing experiments, so purification of the products is an indispensable step. 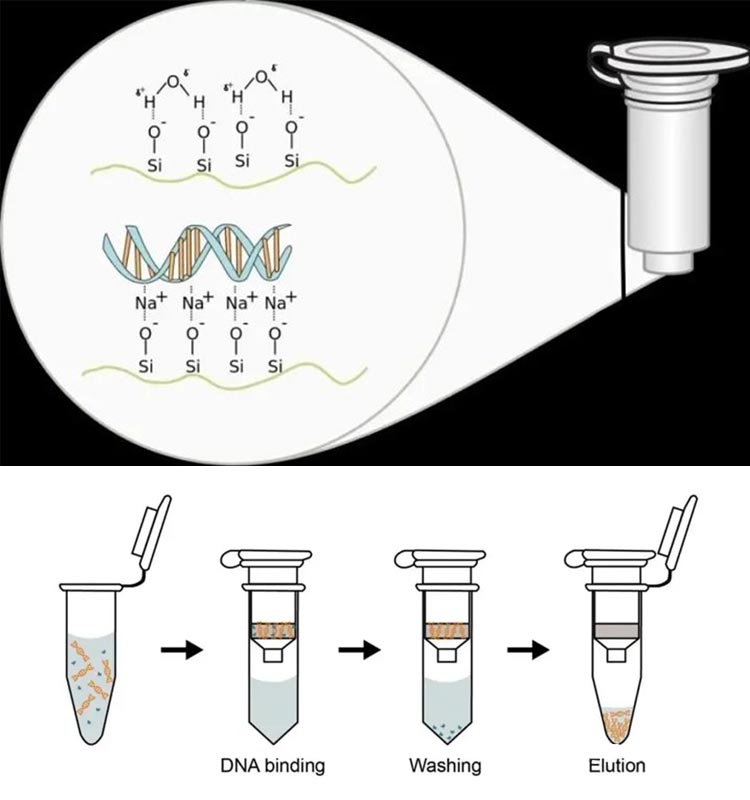 The isolation and purification of proteins are widely used in biochemical research applications. A typical eukaryotic cell can contain thousands of different proteins, some very abundant and some containing only a few copies. To study a particular protein, that protein must first be purified from other proteins and non-protein molecules. The purpose of protein purification is to separate the target protein from all components of the cell lysate, while still retaining the biological activity and chemical integrity of the protein. The separation and purification of proteins is a difficult and demanding task, and you need to choose the appropriate purification method to improve the purity of the obtained protein products according to the characteristics of the protein.

The different amino acid sequences and spatial structures of different proteins lead to differences in their physical, chemical, and biological properties. Using the differences in properties between the protein to be isolated and other proteins, a reasonable protein purification scheme can be designed.

The general procedure for the isolation and purification of a particular protein can be divided into three steps: pre-treatment, coarse grading, and subdivision.

To isolate and purify a protein, the protein should first be released from the original tissue or cell in a soluble state and remain in its original natural state without loss of biological activity. For this reason, animal materials should first be removed from connective and fatty tissues, seed materials should first be shelled or even removed from the seed coat to avoid contamination by tannins and other substances, and oil seeds should preferably be degreased first with a low boiling point organic solvent such as ether. The tissues and cells are then crushed according to the appropriate method chosen for each case. Animal tissues and cells can be crushed with electric mashers or homogenizers or crushed with ultrasonic treatment. Plant tissues and cells, because they have cell walls composed of cellulose, hemicellulose, and pectin, generally require a method of grinding with quartz sand or glass powder, and appropriate extracts together or treatment with cellulase can also serve the purpose. The fragmentation of bacterial cells is more problematic because the entire skeleton of the bacterial cell wall is a peptidoglycan sac-like macromolecule connected by covalent bonds, which is very tough. Common methods for breaking bacterial cell walls include ultrasonic crushing, grinding with sand, high-pressure extrusion, or lysozyme treatment. After tissue and cell fragmentation, the desired protein is extracted by selecting the appropriate buffer. Insoluble material such as cell debris is removed by centrifugation or filtration.

If the desired protein is concentrated in one cellular fraction, such as the nucleus, chromosome, ribosome, or soluble cytoplasm, they can be separated by differential centrifugation and the cellular fraction is collected as material for the next purification step. If the desired protein is bound to the cell membrane or membranous organelles, the membrane structure must be depolymerized using ultrasound or decontaminants and then extracted with appropriate media.

Once the protein extracts (sometimes mixed with nucleic acids, polysaccharides, etc.) are obtained, a set of appropriate methods should be chosen to separate the desired protein from other miscellaneous proteins. Generally, this step of separation is performed by salinization, isoelectric point precipitation, and graded separation with organic solvents. These methods are characterized by simplicity and large processing volume, which can remove a large number of impurities and also concentrate the protein solution. Some protein extracts are large and not suitable for concentration by precipitation or salting, they can be concentrated by more than filtration, gel filtration, freeze-vacuum drying, or other methods. 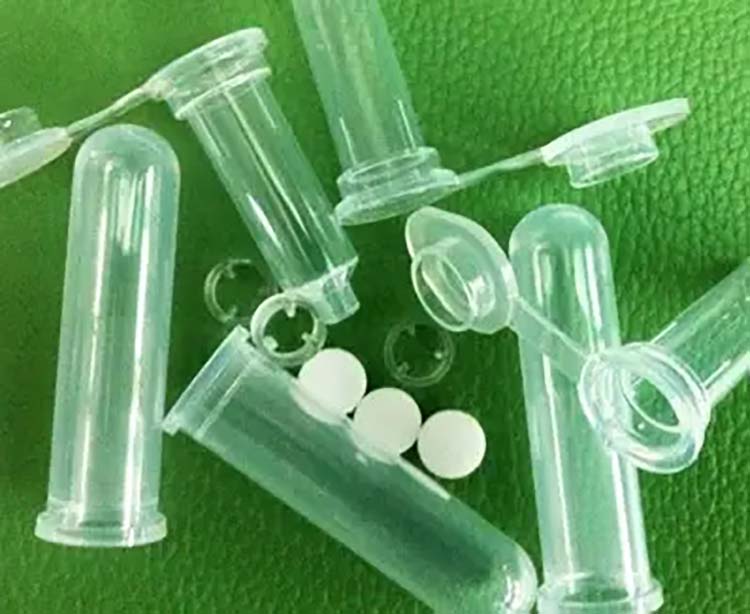 The method of protein spin columns refers to a chromatographic method in which a buffer or organic solvent is used as the mobile phase and a solid adsorbent is used as the stationary phase to make the column composition.
Spin column assembly machine with insert filter

How to buy spin column?

ANTITECK provide lab equipment, lab consumable, manufacturing equipment in life sciences sector.
If you are interested in our spin column or have any questions, please write an e-mail to info@antiteck.com, we will reply to you as soon as possible.
You may also like:
Specimen Bag And Biohazard Specimen Bag
Lab Drying Rack
Laboratory Mills